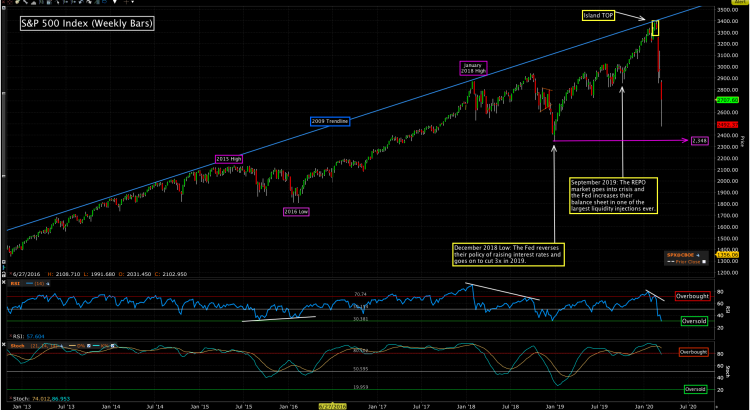 Another wave of selling this week as we are in the early days of a bear market which can last up to two years. Uptrends end in a variety of situations but the one thing that is always true is that it ends as a surprise to many as optimism is highest at the top. The unexpected impact of the coronavirus is the pin that popped the bubble created by the Fed’s policies of low interest rates and easy money. As the global economy comes to a standstill, there will be an unparalleled stress put on corporations across the globe.

Earnings releases are just a couple of weeks away so we will have to wait on how revenues will be impacted as earnings for most companies may not exist this year. There will now be regret on the part of many companies that chose to issue debt to buy back their stock instead of fortifying their balance sheets or investing for their future. This means that the higher amounts of leverage leave less room for companies to survive a deep recession or an interruption to cash flows due to the coronavirus. There is no way of knowing how long global trade will be interrupted as each country is dealing with the virus in their own way.

Consumer spending drives the U.S. economy so everyone working from home means many industries will lose revenue dollars that will never come back. A prolonged change in consumer spending habits may kick-off a credit cycle that won’t stop once it gets started as lenders will get skittish and choose to preserve capital over additional lending activities. We will have to take this one step at a time but the earnings reports for Q1 will shed some light on the risk of a new debt default cycle.

The Fed will be back in the picture this week as they meet on Wednesday where they will make a drastic cut to interest rates. The current Fed Funds rate floats between 1-1.25%, however, T-Bills are yielding as low as 25bps which implies they will move greater than 50bps – some say a full 1%.

The Fed’s liquidity injections have added to the unrelenting rise of the stock market for a dozen years and it may be out of bullets. The rate cut this week won’t change anything for consumers that are impacted by the coronavirus. I could also make the argument that the Fed has hoarded liquidity and is now causing dislocations in the Treasury market where investors can’t find enough risk-free bonds in a time of uncertainty.

As you can see in the chart of the S&P 500 below, it looks like many investors could have made good use of these bonds last week. From what I see, we are still in the first leg down of this downtrend and that we are likely re-test the December 2018 low sometime this month. Looking at some of the intra-day volume trends over the last two weeks, I was surprised there was not more shares trading. This may be a sign that larger sellers are holding off as the market plummeted which means there is overhang from sellers at higher prices. But this is what you see in a bear market, everyone hitting the exit door at the same time.

That is all for now and thanks for being a subscriber!