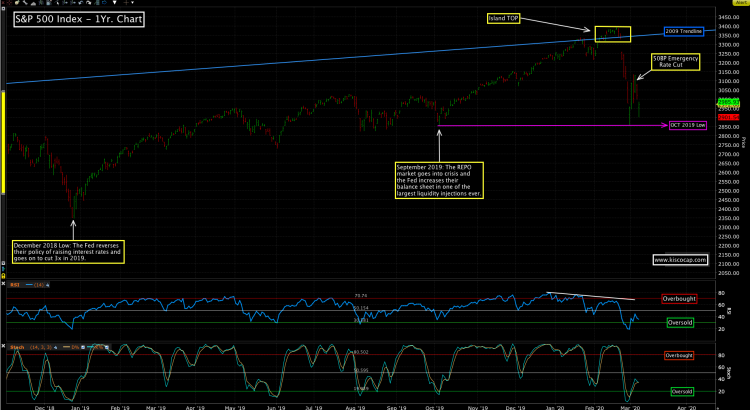 The Fed is back making major policy moves and you can see by the chart below, a 50bps move is a rarity and one that we haven’t seen since 2008. In most cases, the market was in the process of a cyclical correction like in 2000 and 2008.

The entirety of the curved crashed lower in yields after the announcement with long-term bonds reaching all-time lows. As you can see, the 30Yr bond yield dropped 35bps Friday morning to close at 1.288%. The Fed meets later this month and the Treasury market is telling us that there is a high probability of another 50bps rate-cut as T-Bill yields are trading 50-60bps below the 1-1.25% Fed Funds range. There is even a small probability that the 10Yr yields 0.0% by December. The Treasury curve is warning that the economy will contract in 2020 and that equity prices are likely to greatly suffer.

In another warning sign, credit spreads on high-yield bonds started to widen this week which we have not seen since December of 2018. As you can see, they can go much wider.

There has also been a migration to issuers that are below investment grade over the last 10 years which means a sustained move higher in credit spreads will be highly problematic for these issuers.

Let’s not forget about consumer debt which has largely been solid as the jobs market is robust. However, the consumer has taken on increasing levels of debt as interest rates have continued to fall over the last several years. A spike in the unemployment rate would bring another level of pain that we have not seen since the housing crisis.

So, all of these issues have been brewing over the past few weeks as the global supply chain is sputtering amid an outbreak of a highly contagious coronavirus. Hopefully, the warm weather will curtail the outbreak but it looks as though the number of cases domestically is just beginning.

From an investing standpoint, we are flying blind until companies disclose how the supply chain disruption is affecting their ability to generate revenues. We could be in for some ugly earnings reports in Q2. For now, the charts are providing some clarity in direction as it looks like we are in the early stages of a larger correction. A break of 2,850 (pink line) would kick-off another wave of selling that could re-test the December 2018 low. Perhaps, another wave of selling will guarantee 50bps from the Fed later this month.