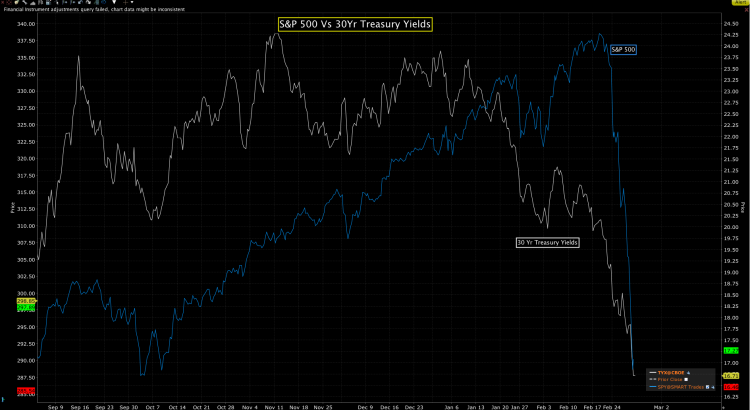 The stock markets gave back five months of gains in five days this week. As you can see in the long-term chart below, the S&P tagged a trend line from the 2009 low (blue line) which was was rejected and then caused stock prices to crash down to the October 2019 low. One of the worst weeks on record for the stock market and I think this is just the first leg down in a much larger correction that will play out over the next several months.

The bond market also reacted as yields plunged signaling that a rate cut from the Fed is likely in 2020. The chart below shows how the divergence between bonds and stocks re-connected in swift fashion.

If you have been reading my posts, you have seen this chart before in Signs of Divergence. You can also review the negative technical indicators in my post on Warning Signals from January 19th. This type of price correction was in the cards and finally came to fruition this week. What is happening?

The media has attached the coronavirus to the cause of this correction but the Fed is responsible for pushing stocks into an unsustainable position. The emergency REPO overnight lending program to financial instittuions began in October of 2019 where the Fed began increasing their balance sheet by $450B+ to near $4Trillion.

This was the fastest increase on record as the REPO program involved the Fed buying massive amounts of T-Bills. This program began slowly in August and accelerated in early October which pushed stocks higher unabated until February – see chart below.

One more notable, an Island Top (Reversal) formed in February which you can see in the upper right hand corner in the chart below. So, the S&P 500 was overbought, tagged the 2009 trend line resistance and now has an island top. I wouldn’t bet on tagging that trend line again anytime soon.

As you can see from the technicals, the collapse in equities was not a surprise nor is it totally caused by the coronavirus. However, a slowdown in global trade (very likely) could initiate a credit cycle if revenues are interrupted because their supply chains are frozen. Let’s also keep in mind that corporate earnings growth was flat in 2019 while stock buybacks continued uninterrupted so many balance sheets out there are not prepared for a disruption in cash flows. Too early to say this will happen but there is a lot of leverage in the system and corporate America may have been caught swimming naked as the tide goes out.

Flight activity in China before and after the coronavirus.