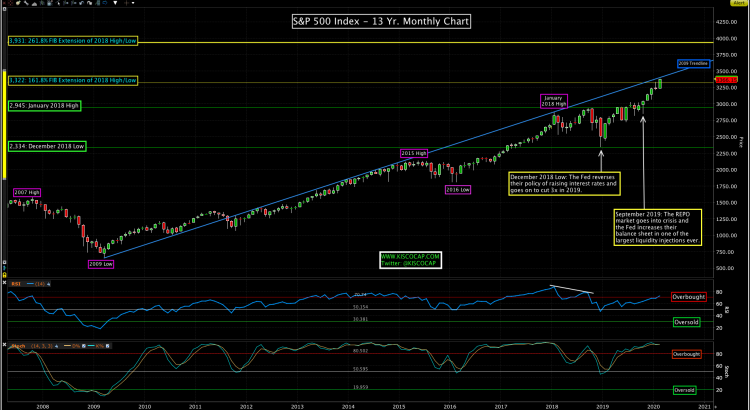 Despite the backdrop of a growing risk to global trade and growth, the S&P 500 refused to breakdown this week. Clearly, the severity of the coronavirus in China increased this week and more trouble is surely ahead for China’s trade partners. So, what is holding up this market?

The graph above shows the securities held on the Fed’s balance sheet – the green line is Treasuries and the yellow line represents mortgage backed securities. The green line shows that the Fed has been buying again to prop up short-term lending operations (REPO) that has acted as another version of quantitative easing. This additional liquidity eventually makes its way back to risk assets like stocks and junk bonds. However, the Fed announced this week that they are trying to ramp-down this “temporary” program in the coming weeks as I think they now know they are directly influencing stocks to push higher unabated.

This is not a new phenomena. In 1998, the Fed provided stimulus after the Russian default crisis which in turn caused the NASDAQ to double in 1999. However, this market has been a slow-burn higher as the Fed has been pulling the liquidity levers since the 2009 low.

The Chart of the S&P 500 above illustrates a significant trend-line that started at the 2009 low. We have been bumping along its underside the last two weeks which means the S&P 500 could give up the ghost and begin a correction. Alternatively, a breakout above the trend-line could mean a push towards 4,000 later this year as shown by the 261.8% extension. In either case, there are many technical signals that the uptrend has weakened significantly so a breakout would have to wipe out all the negative divergences but at least we have a guideline if it happens.

The best barometer of risk over the last few weeks has been the bond market where Treasury yields remain stubbornly low. A close on the 30Yr below 2% would be a warning signal to the stock market.