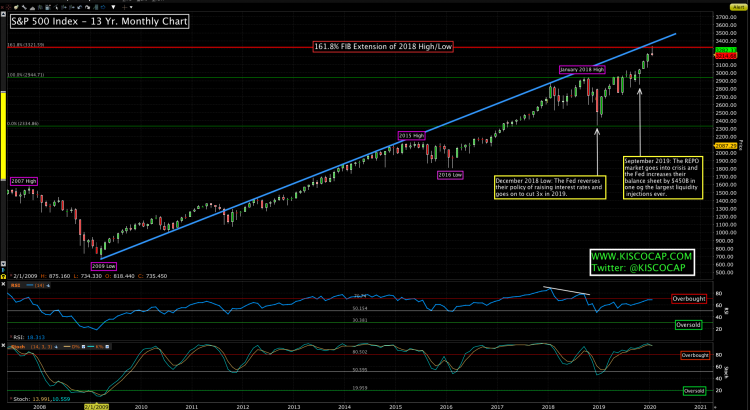 The S&P 500 tapped a line of resistance for the month of January as you can see in the chart below. The 161.8% Fibonacci extension at the top of the chart is essentially an echo of the 2018 High/Low – so the fact that the S&P 500 was rejected at this level (3,321) is of significance.

As I wrote in Warning Signals there have been several technical indicators cautioning of an impending correction over the last several weeks. Essentially, the Wuhan virus coincides to the market capitulating to the weak technicals that have been brewing under the surface. But to what degree? We will find that out in the coming weeks.

The chart below highlights one metric that highlights how monetary authorities across the world have cut interest rates 80 times over the last year and printed upwards of $1 trillion over the last four months. This leaves the equity markets in a vulnerable position as too much stimulus causes froth.

Several countries are declaring emergencies while airlines are suspending their flights to China which curbs tourism and jeopardizes the supply chain for companies around the world. From what I read, the virus is still spreading so we will have to wait and see how long it takes for new cases to plateau before we can assess how much global GDP will be impacted.

China’s stock markets have been closed all week due to the Lunar New Year so Monday’s session is likely to have some fireworks. Stay tuned!

This map shows levels of preparedness across the world while Africa’s vulnerability is immediately noticeable.