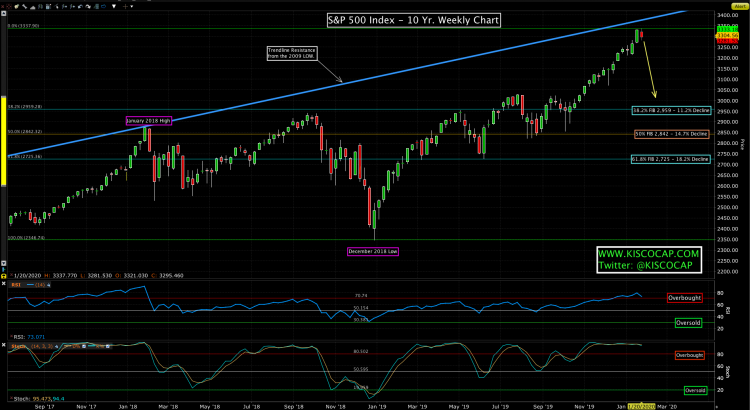 Everything is on hold now as we may be on the cusp of a global pandemic due to the outbreak of a highly contagious virus (novel coronavirus 2019-nCoV) spreading throughout China. Cases are beginning to pop up across Asia, Europe and now two in the United States. Over 40mm people in 13 cities are under quarantine in China in under two weeks so there is the potential for global growth to hit the brakes until the virus is under control.

Today, China is a global leader in trade and manufacturing so the odds are much higher that there will be an impact to financial markets and global trade. But by how much? How does one gauge the impact if a company like Apple says their ability to make and deliver iPhones is impacted by the virus? This virus is in early days but it is hard not to prioritize its risk over earnings, the Fed or the manufacturing slowdown we endured over the last six months. Why? Because there is no way to quantify the worst case scenario as the virus spreads. Let’s hope for the best and position for the worst.

The price action to close out the week reflected the growing risk to global trade while Asian markets were closed for the Lunar holiday. China’s stock market dropped 2.5% on Thursday so I expect more weakness in global equity markets to spill into next week. Below, I have included a chart with some fibonacci retracement levels from the 2018 low. They may be too conservative but a large drawdown would easily case double-digits losses.

The market value of the U.S. stock market, as measured by the Wilshire 5000, a capitalization-weighted index of about 4,000 stocks, has been bigger than the gross domestic product of the United States for several years. But last year’s surge in stock prices took the Wilshire to a valuation of $33.9 trillion, or 157.4% of the last reported GDP.