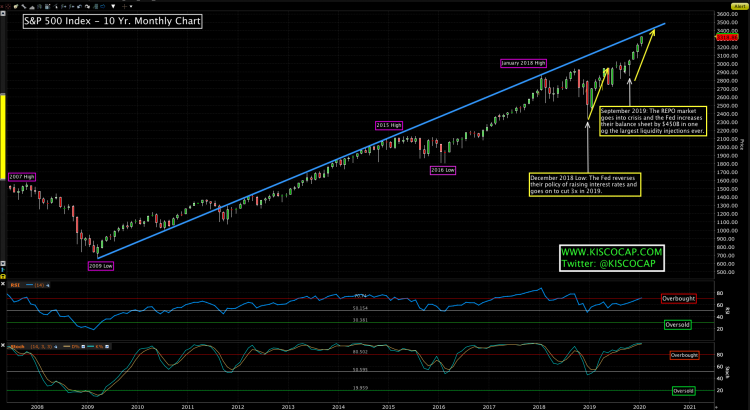 Another week of higher prices in stocks in one of the more aggressive moves we have seen since the 2009 low. In the chart below you can see the S&P 500 approaching a long-term trend line which should act as resistance. Also, the yellow arrows highlight the slope of this advance which is the most aggressive since the 2009 low. Is the market about to exhaust itself to the upside?

So, let’s review a few charts to get an appreciation for where we are. In September, there was a funding crisis in the overnight lending (REPO) markets which caused the Fed to expand its balance sheet by $450B over the past few months. This program continues today but I have read recently that the Fed will attempt to reduce the size of this program in the coming months (I have my doubts). The index below gives some relative measure as to how this latest move by the Fed compares historically.

The Fed activity is nothing new but at some point valuations will stretch too far to be sustainable. In the next chart, the median of non-financial small cap companies are trading at a historic high multiple of 44x with 37% of domestic small caps losing money over the last twelve months. The Russell 2000 should lead as a growth sector so it is not a good sign it has struggled to eclipse it’s previous high in July of 2018.

Some of the technical indicators are flashing warning signs, too. The amount of traders shorting the SPY (S&P 500 ETF) has evaporated and stands at only 1.1%. You always want a healthy 2-way tension between longs and shorts and this relationship is back where it was prior to the January 2018 top.

The options market is also showing a great deal of complacency. The ratio of put to call options is tracked to identify extremes in sentiment. As you can see below, the December 2018 low marked an extreme of pessimism and today we have the exact opposite.

Some of the short-term chart patterns indicate we may have a bit more to go on the upside but a correction of some magnitude is in the works.

According to the World Economic Forum: “Reduced trade volumes are largely the result of high levels of trade restrictions. While both the U.S. and China experienced drops in volume, these were below the global average – coming in at 2.4% for China and 0.6% for America. Germany, which relies heavily on trade, spent the year flirting with recession and this is reflected in a 4.7% decrease.