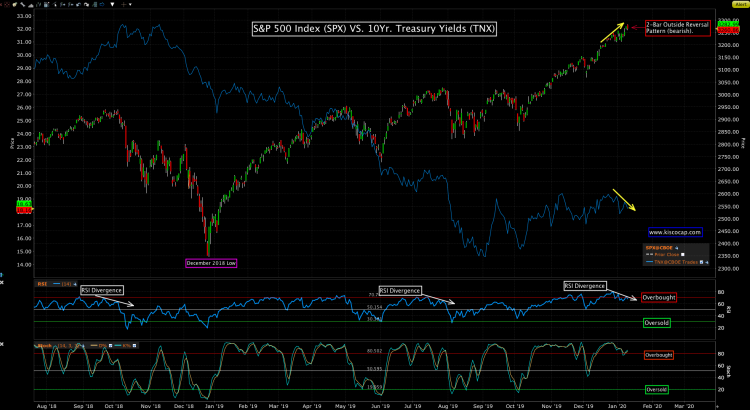 Moving on to the chart of the S&P 500, we can see some divergences that should be noted (6 month chart). For one, 10Yr bond yields and the RSI (Relative Strength Indicator) both fell as the S&P continued rising this week – signaling a weakening uptrend. The last notable in the chart is the 2-bar outside reversal pattern to close out the week. This pattern is only two bars but combined with some of the technical divergences, it makes the open in futures something to watch (futures start trading at 6pm on Sunday).

If we have a down open tonight and a push lower this week, we can begin to get a read on which degree of correction is underway. This chart also shows how treasury yields and the S&P have diverged for some time which signals the rise in equities this past year may not be sustainable.

If we push higher next week, the market will move into a place where a sharp reversal is more likely especially if the technical divergences continue. In either scenario, we should have a corrective move in equities coming up sometime in January.

That is all for now and thank you for being a subscriber.