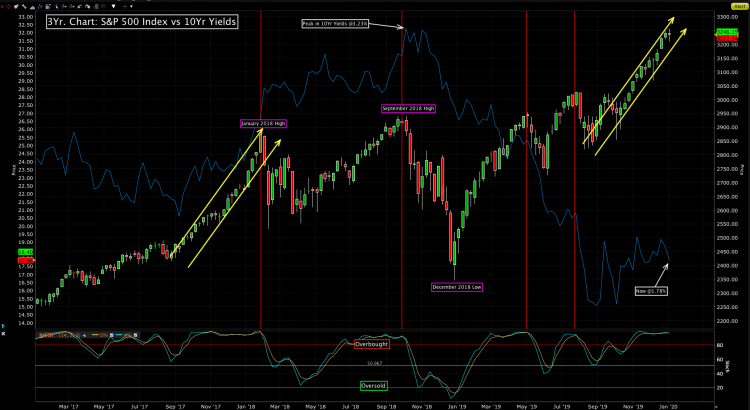 You may have read about the Iranian attack on Friday morning that caused stocks to fall and oil to rise. But the real battle has been between 10YR Treasury bond yields and the S&P 500. In the chart below, you normally want to see the two trend together – as stocks rise, so do interest rates as the assumption is that the economy is growing. But that relationship is not working right now, so let’s take a closer look at the chart.

The blue line in the chart represents the yield on the 10Yr, you can see that interest rates peaked at the September 2018 top coinciding with the S&P and that is when the two began to diverge. As stocks have marched higher since the December 2018 low, Treasury bond yields have been steadily falling. This divergence indicates that turbulence is in the 2020 forecast for the financial markets.

The bottom of the chart also shows a momentum indicator called a Stochastic that can identify turning points in stock prices. I have highlighted most of these turning pints with a vertical red line to show how prices reacted once this indicator began to turn down from overbought levels. The best parallel is the period leading up to the 2018 top. The stochastic indicator was pinned at overbought levels for some time until prices broke support and abruptly turned lower.

The two indices will eventually converge in the same direction. Did we see a turning point on Friday? Too early to tell for sure as we need to understand better if the military action this week shifted some of the global macro risks regarding politics, oil prices and trade tensions. But the technicals indicate that stocks need to take a break at the very least. For now, the S&P has won the battle but not the war.

That is all for now and thank you for being a subscriber.