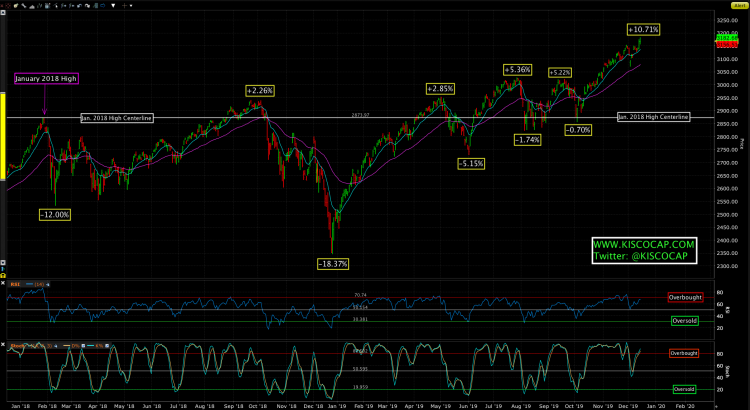 We are starting to get the answers we wanted over the last two years. BREXIT is going to happen with the recent elections in the U.K. and the trade war with China is in a place where the market can feel better that there will be no further escalation. This brings greater certainty to the markets and let’s not forget the Fed cut interest rates three times in 2019. The manufacturing recession that happened over the summer is healing but the jury is still out as China and Europe are still wading through sluggish economies. However, the increased clarity will take time to work their way through the markets so we may not know until next summer how this all shakes out regarding better trade relations and increased corporate profitability.

For the chart below of the S&P 500, I used the January 2018 high as a centerline to show that the stock market has not done much for the better part of two years. The 2018 high is important because it coincided with a great deal of optimism that resulted in a “surprise” move to the downside. Most significant tops have some kind of elation among investors so we need to be on guard for an interim top given the recent China/BREXIT news and the fact that the S&P is approaching an overbought condition (see Stochastic at the bottom). The size of the next correction will be telling and should provide clarity on the strength of this small uptrend that began in early October.