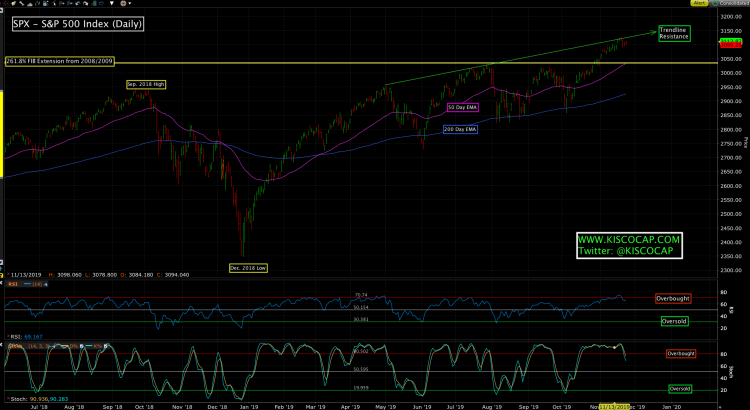 I’ll keep it short this week as the market and media were a rerun of last week. The S&P 500 was down slightly and continues to work off overbought conditions. At the bottom of the chart, you can see that the momentum indicators have some room to go before fully working off the overbought condition from the last six weeks of buying. A move down to the centerline or a re-test of the previous all-time high at 3,035 are entirely possible. If the S&P 500 crosses below this level then a larger degree correction may be starting.

Volatility has been smashed these past few weeks as a reminder that the Fed continues to buy T-Bills to the tune of $60B monthly so it will be hard to fight this Fed into 2020.

Happy Thanksgiving and I’ll be back to you in a couple of weeks!

Tesla unveiled its long-rumoured all electric pickup truck on Thursday. While the truck’s design certainly isn’t for everyone, the idea behind it is actually sound. “We need sustainable energy now. If we don’t have a pickup truck, we can’t solve it,” Musk said during the unveiling, adding that “the top three selling vehicles in America are pickup trucks.” (Statistia)