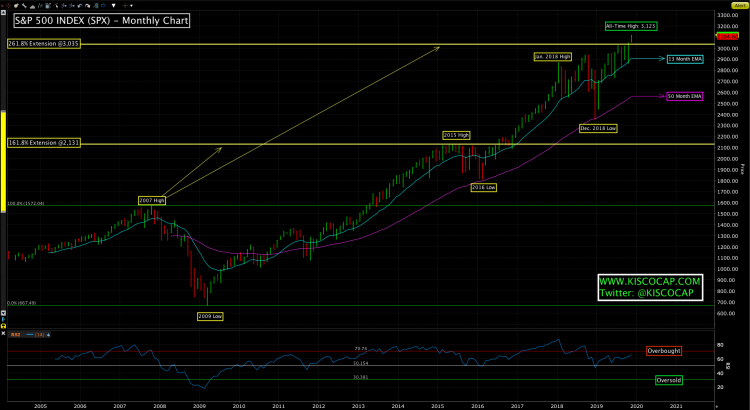 The stock markets have edged higher since early October and now are making new all-time highs. Economic data could look better but the good news is that the deterioration that we saw over the summer is abating. Trade negotiations with China are in flux but both sides are indicating signs of an agreement so there is a case to be made that an economic malaise is not on the horizon. Not to mention that the Fed cut rates three times this year and is buying $60B monthly in T-Bills – a policy change that typically affects the economy with a six month lag. Below is a chart of the Fed’s balance sheet that has started to hook higher on the far-right side of the chart.

I thought it would be a good idea to analyze a longer-term horizon on the S&P 500 index this week. Looking back to the financial crisis, we can see a top in 2007 and a bottom in 2009. We can take this top/bottom and use Fibonacci analysis to see if there is an “echo” or extensions from this very significant place in the long-term charts.

Note: Each bar or candlestick (see definition HERE) in the chart below represents one month of price action.

As you can see, the 161.8% extensions at 2,131 acted as a barrier where the S&P 500 hung around this level for around 21 months. At the time, it appeared a larger top was in place as the Fed was putting a moratorium around increasing its balance sheet. However, the Fed’s forward guidance and promise to maintain the $4T in assets on its balance sheet gave markets enough confidence to breakout from this consolidation period.

Fast forward to today and you can see we have been consolidating under the 261.8% extension for the last 22 months. Again, the markets were justifiably concerned about the Fed’s policy as the interest rate increases in 2018 combined with a reduction in the balance sheet caused stocks to fall 20%. Eventually, the Fed reversed course and so did the S&P 500 as most of 2019 has been a recovery trade to previous highs established in 2018.

The month of November has brought us above the 261.8% extension and a close on November 30th above 3,035 could be the start of something that lasts past the next election cycle. If this assertion is wrong, then a reversal is probably lurking within the next several weeks and we can see which levels in the chart hold as critical support.