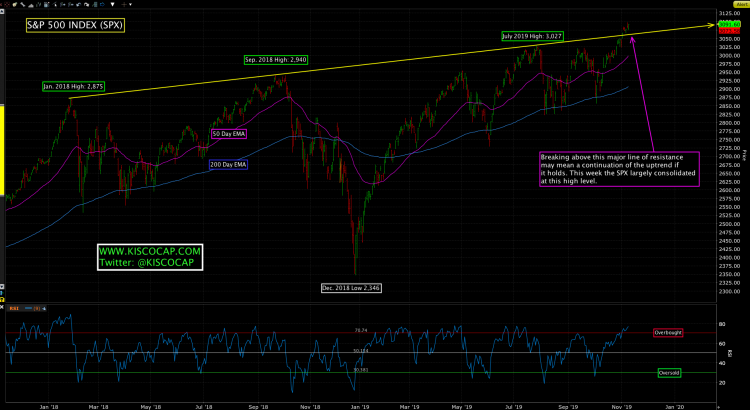 The S&P 500 moved up slightly this week (0.38%) but mostly consolidated after breaking a major resistance line in the chart below (yellow line).

The market is focused on any news regarding a trade deal with China as trade uncertainty has caused CEOs to re-think international supply chains and how they do business which threw a wet blanket on growth over the summer. Progress of any kind should begin to alleviate the uncertainty regarding supply chains and margins but we will have to wait until something is announced to be sure.

Behind the curtain, our friends at the Fed are expanding their balance sheet as you can see in the chart below. Currently, the Fed is now buying $60B of T-Bills to support the short-term lending markets.

Eventually, the liquidity created by this new T-Bill program will end up going into the stock market (give it some time). The yield curve is also beginning to steepen which may be signaling one of two scenarios. The optimistic scenario is that the economy is about to show better growth prospects like after an economic slowdown (or trade tariffs). The pessimistic outlook is that the steepening after an inversion means a recession is right around the corner and that the stock markets will tumble.

My read is that the markets are not signaling a recession. A protracted trade war could cause a recession but it looks as though both sides are going to capitulate just like the Fed did last month. The timing of a deal is elusive, however, and if there is a “no-deal” scenario then the markets will reverse course and an economic slowdown will become a reality.

Disney is gearing up to launch their Disney+ streaming service on November 12, which will cost viewers $6.99 per month. It’s one of the most competitive prices, only beaten by Apple TV+ at $4.99 per month.