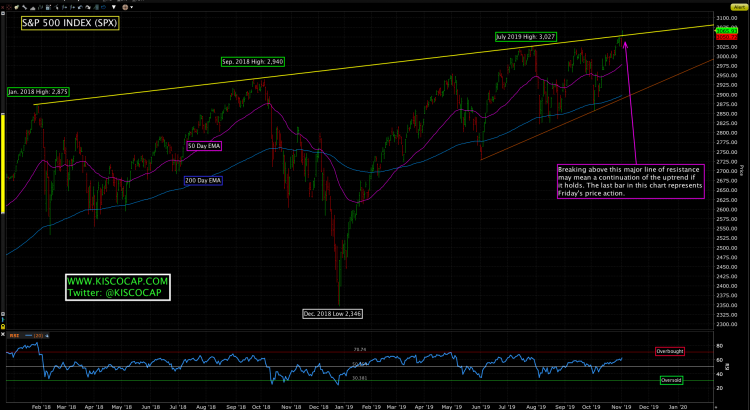 The Fed cut interest rates on Wednesday for the third time this year indicated that they are likely done for the foreseeable future. Also, the Repo operations that began in mid-September will continue into next year where the Fed is purchasing up to $60B of T-bills on a monthly basis. Chairman Powell tried to differentiate this operation from their previous QE programs but as long as their balance sheet is expanding the stock market will absorb the additional liquidity added to the system.

Manufacturing has been waning over the past six months so this rate cut is welcomed by corporate America. Consumers will also get a break on their credit cards, auto loans and mortgages that should buoy spending into the holiday shopping months.

The temperature on the trade war with China looks to be cooling off as both sides have agreed to structure a deal in three phases. Reports indicate the final touches on Phase 1 are nearing completion and that a location for Xi and Trump to execute the agreement will be announced in the coming weeks. The big picture here is that China needs a deal to avoid an economic slowdown in 2020. So, expect more noise in the news cycle but a deal of some kind will happen.

The S&P 500 below has had several opportunities to breakdown in 2019 but it hasn’t happened. We did get a break of a major trend line on Friday that has acted as strong resistance as you can see below (yellow line).

Things look they are turning for the better in the stock market. Growth stocks are catching a bid, the China trade deal is progressing, interest rates will remain low, GDP readings held up this week and the earnings season is shaping up to be better than expected. Some good follow-thru next week would be a good technical sign that a new uptrend is in its early stages.

The following are the stocks and sectors that stand to win or lose the most regarding the outcome of trade negotiations with China.