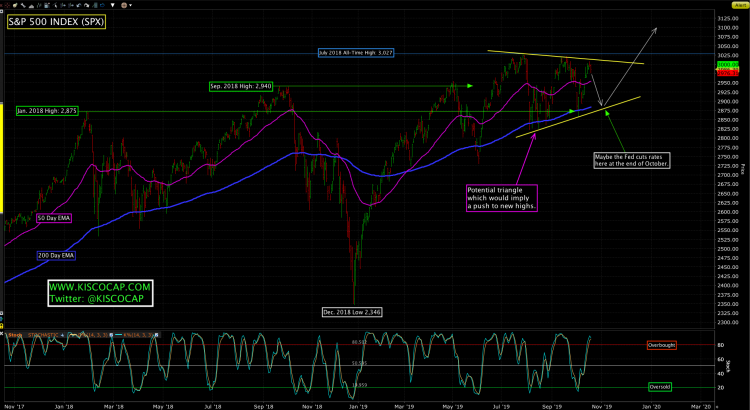 All the cards are on the table and now we will see which players can pull an ace from the hole. The vibes in the financial markets over the last few months have been bad as global growth slows and international trade relations deteriorate. Who is playing with a strong hand?

A complex set of circumstances that boil down to the price of the S&P 500. Removing uncertainty and providing liquidity can change sentiment and behavior of large and small companies that have been cautious these past six months. It will be an interesting game to watch but the everyday reality is in the market where there is no bluffing.

In the chart of the S&P 500 Index below, we are a bit higher from last week but there is a potential wedge pattern developing. Typically, prices move abruptly higher out of this pattern, however, one more leg lower is needed before it is completed – a break of 2,860 would eliminate this possibility. The S&P 500 may be showing its winning hand here but a bit more time is needed to see all the cards.

The name on the top is Saudi Armco which is trying to get an IPO done at a $2T valuation. It is the state owned oil company of Saudi Arabia and is the source of their wealth.

That is all for now until next week’s Market Update and thank you for being a subscriber!