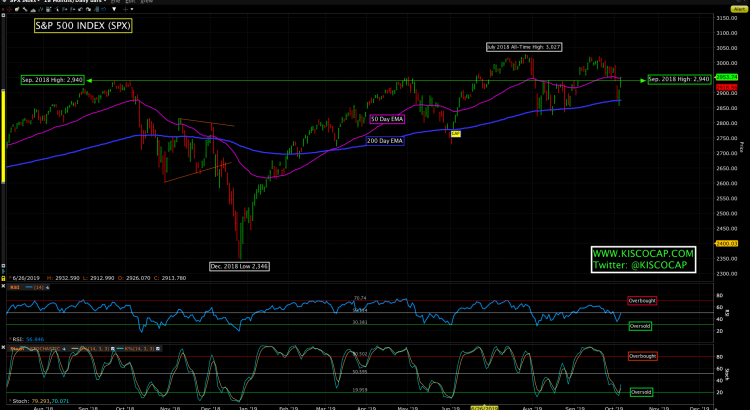 Time and again, the Fed has provided stimulus to keep the stock markets afloat for many bumps in the economy over the last 10 years. Will they do it one more time? The REPO activity at the end of September caused the Fed to increase the size of their balance sheet (+$185B) which replicates the effects of Quantitative Easing (QE). On Friday, the Fed announced their emergency REPO activity would be extended until November 4th ($75B weekly) – this means there is something wrong with the overnight funding markets or the Fed is creating a backdoor way of re-starting QE (or both).

The byproduct of low interest rates is debt creation on all levels – consumer, corporate and sovereign. There is about $10T more in debt outstanding then at the height of the financial crisis in 2008 – a one-third increase.

More debt outstanding means corporate America is sliding towards below investment grade credit ratings. Corporations have used low interest rates to buy their own stock in lieu of investing in their future to grow revenue and profits. Over time, this activity begins to chip away at a company’s ability to re-pay its debt. Unfortunately, this dynamic eventually robs investors of owning safe assets in times of recession or economic uncertainty. In the chart below, a recession would largely shift most companies from the ‘BBB’ bucket to ‘BB’ (or lower). This scenario also implies a much higher risk of default whenever the next recession unfolds.

Are junk bond holders getting paid enough to hold this higher default risk? Not according to the chart below that shows a big disconnect between weakening manufacturing data and high-yield bond spreads. This sets up the corporate bond market for a swift tumble when the two converge in a weakening economy.

So what is the S&P 500 doing now? Not much as you can see over the last several months. Very choppy and not trending so the technicals have been frenetic. However, this week we filled two gaps in the chart and bounced hard off of the 200 day (blue line) to close out the week.

If we widen out the chart to when the Fed raised interest rates last year (October 2018) we can see that not much has happened in the past year, either – except for one slight new high and several whipsaws. Will the Fed capitulate one more time and and rescue the S&P 500 from this choppy range?

If you watch stock charts for a living you can’t help but notice this chart looks like a parabolic stock about to make a large correction.