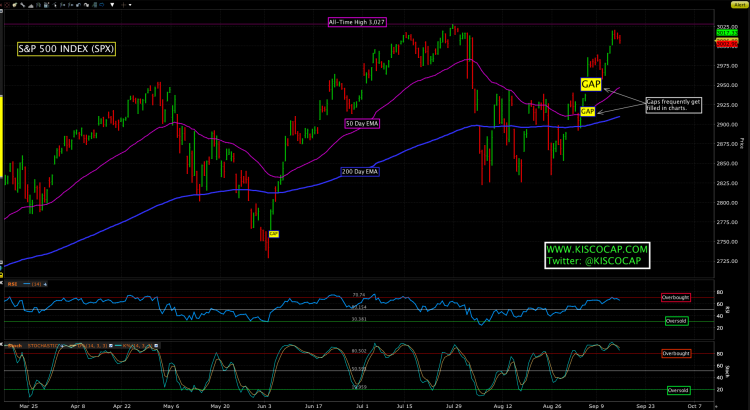 The European Central Bank (ECB) lasted nine months without their Quantitative Easing program as their stimulus measures are again needed to support the slowing EURO zone (more below). Is the Fed next?

We will have additional clarity on Wednesday where the market expects the Fed to cut interest rates 25bps and perhaps provide some forward guidance. On Thursday, we will get rate decisions from the Bank of England (BoE), the Bank of Japan (BOJ) and the Swiss National Bank. There may be a concerto of stimulus or a swan dive of disappointment a week from now.

In typical fashion, the stock market has brought the S&P 500 right back to the July highs in front of all these meetings. Since the S&P 500 has largely been going sideways since the January 2018, we are either in the process of forming a long-term top or getting ready for the next leg up in the stock market.

The fundamentals across the globe are in a weakening state so stocks will need a nitro boost from the central banks. At this point, however, more QE programs will be like pushing on a string – little return for the effort. Ultra-low rates encourage financial engineering (borrowing & buybacks) over capital investment (building factories & innovation) so these policies are becoming counter-productive and will end someday but probably not next week.

What counts is market expectations verses what is delivered by the central banks next week. This could mean that additional stimulus measures fall short and are met with weaker stock prices. One notable to also consider is the dollar and its strength verses other currencies. A continued strong dollar in the coming months means capital flows will be aimed towards buying US stocks and bonds. On the other hand, if next week is an all-around disappointment then we are likely to fill the gaps in the S&P 500 chart above and re-test significantly lower.