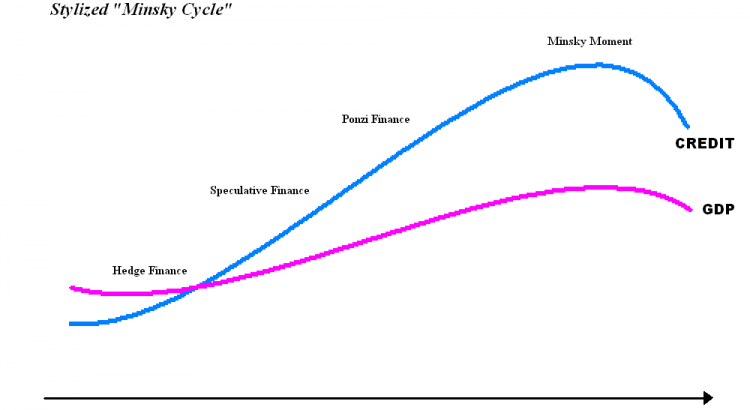 For those not familiar with a ‘Minsky Moment” you can read up on it HERE. It is a term that refers to a point in time where a leveraging cycle in the economy is about to enter into its final stages. This event is preceded by a cycle where borrowed money is encouraged over cash – sound familiar? The byproduct of the Fed’s ultra-low interest rates has spurred record amounts of consumer, commercial and sovereign debt financing so Minsky’s theory may be playing out in historic form.

However, what matters most is when it starts. It is not that hard to figure out that the debt party will end one day. For the mortgage market in 2007, the Minsky Moment was when borrowers failed to make their first payment which caused the securitization market to implode as mortgage bond prices fell and trapped investors in bad assets. You might think that the mortgage market would have tapped the brakes before its apex but that is how debt markets work – they keep issuing until they can’t anymore. There were warnings signs as early as 2005 but investors drew comfort in that new issue mortgage bonds kept clearing the market at ever lower yields. What could be wrong if the bonds kept clearing the market at that level? At the time, investors failed (ignored) to see that buyers were thinning out and that Wall Street was complicit in stuffing bonds that nobody wanted in structured vehicles (CDOs). Eventually, players either ran out of money or were told their bonds had no buyers. That is when the fun started as the stock market took over a year to get the joke.

Today’s version of 2007 lies within the high yield debt markets that did have a brief Minsky moment at the end of 2018 when the high yield market shut-down. As you know, the Fed saved the day and the bonds flew off the shelves in January so the Fed bought itself some more time to manage the next financial crisis. I have been reading about more bond issuances beginning to struggle for buyers so there are cracks emerging in the credit markets.

Despite all the tools the Fed has at their disposal, they are not ready for a global thermonuclear trade war – that is out of their hands. And the battle is heating up as the Chinese upped the ante this week with additional tariffs against the U.S. and the President responded in kind late Friday. It is clear that this won’t end anytime soon and the stock market is now starting to get the joke .

The S&P 500 has closed lower over the last four weeks and dropped 2.55% on Friday. In the chart below, the expanding triangle pattern may be starting to gain some traction. If correct, we will take out the December 18 low in the coming weeks/months.

The NFL season opener is September 5th, below is how much you have to pay to be an owner.