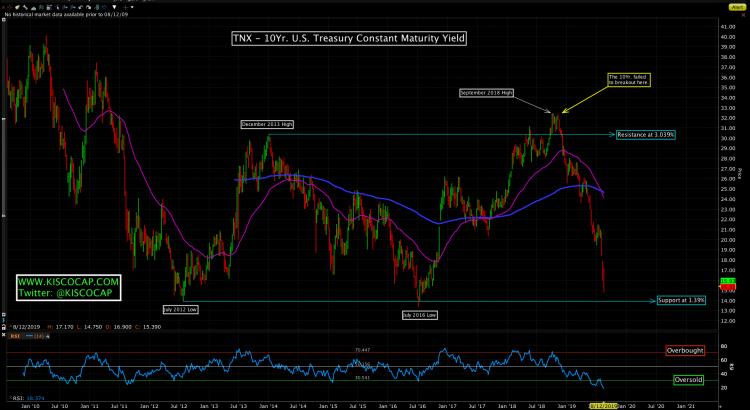 A lot of news happened this week in the macro markets from Argentina’s peso crashing to protests in Hong Kong while additional signals flashed that trade tensions are impeding global growth. More economists are also coming to the opinion that the Fed’s attempt to raise interest rates last year had a much bigger effect than intended and that the reverberations are just being observed now (Fed policy works on a lag). The chart below illustrates what the “true” Fed funds rate was if you included the size of the Fed’s $4T balance sheet which equated to a negative interest rate:

If you factor in the reduction to the Fed’s balance sheet PLUS the rate increases then it was the equivalent of raising interest rates by 5.75%! Keep in mind that the Fed has never had a balance sheet this big so it is using trial and error to navigate policy decisions as all of this is unprecedented. These changes also take time to work through the macro markets so it is no surprise that there is a slowdown around the globe many months later.

Below is the chart of an index of 10Yr Treasury yields. The 10Yr yield peaked just as the Fed implemented its brief tightening policy last October. You can see how yields have plummeted the last several weeks and now it looks like we are going to test the low of 1.39% soon.

If you recall from last week, the S&P 500 Index may be carving out an expanding triangle pattern which means a break of the December 2018 low is likely in the coming months. The price action this week was largely unchanged, however.

The Fed releases it’s minutes on Wednesday from their last meeting so that will be the highlight for next week. As of right now, all of the news which you can read about below is starting to wake-up many players that they will be wearing their risk management hats into the Fall.

That is all for now until next week’s Market Update. Thanks for subscribing!