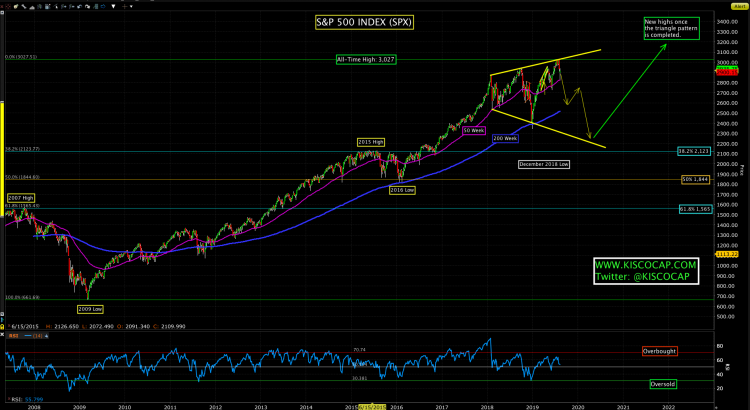 The currency wars have been brewing for years as central banks have been racing to the bottom with zero interest rates and expanding balance sheets in an attempt to create perpetual growth machines for their respective countries. The byproduct of these policies have created staggering levels of debt and an ever increase wealth gap as stock markets advance on ever increasing amounts of liquidity. Negative rates are the standard now for Japan and the EURO zone.

The Fed’s attempt to reverse course last year didn’t work as global stock markets plunged in reaction to the withdrawal of liquidity. 2019 has brought us an inverted yield curve, a rate cut by the Fed and more tariffs against China. In response, the Chinese devalued their currency approximately equal to the amount of the tariffs sending a signal that there will be no resolution coming anytime soon (see below). What happens in the coming months will be one for the history books.

There are many variables to consider in the macro picture today but there is a potential technical pattern developing in the S&P 500 which may provide clarity on what happens next. Below is a chart of the S&P 500 index back to the 2007 high. Some observations on this chart: the 200 week moving average (blue line) has contained major drawdowns such as January 2016 and December 2018; the Fibonacci grid from the recent high to 2009 low has its most common retracement level of 38.2% coinciding with the 2015 top; there is an expanding triangle forming (yellow lines) which, if right, would imply we take out the December 2018 low.

If the expanding triangle theory is correct, that would fit with a slowdown in global growth coinciding with the tariffs levied against China. Expanding triangles do not mark the end of a bull market so the silver lining is that this scenario calls for one last run to new highs once the triangle pattern is complete. What would cause a bottom and a reversal to new highs? How about a trade deal with China? Politicians always succumb to pressure caused by the financial markets so don’t be surprised if there is a trade deal with China prior to the Presidential election next year.

The expanding triangle theory would be broken if we take out new highs in the coming weeks at which point the longer-term chart pattern would need to be revisited. We should have some clues on the bigger picture by this time next week.

Every time the 30 year Treasury yield has moved by 40+ bps in 5 days something very major has happened. In this case, the trade war with China has escalated beyond a skirmish and may have broader implications for global growth.