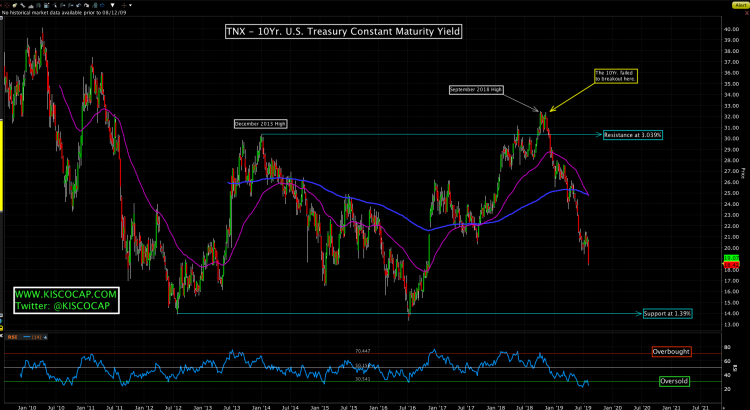 A critical week as the Fed disappointed the markets on Wednesday while the White House brought the tariff hammer down upon China on Thursday. Let’s take a look at how the S&P 500 and the 10Yr Treasury bonds reacted.

Below is the S&P 500 Index and the big question is the depth of the correction that started this week. Are we correcting the June low or the December 2018 low? So far, the S&P 500 tapped the 38.2% retracement on Friday at 2,913 and closed this week below the 50 day – not great.

The 10Yr Treasury bond broke below 2% this week in a sign that something more serious may be brewing. The chart looks as though we may re-rest the 2016 low of 1.39%.

If you recall, earlier this year the yield curve inverted in a sign that a recession was on the horizon. Could the tariffs implemented by the White House tip the U.S. economy into contraction? Overseas, we are seeing a recession brewing in Europe while China/Japan/South Korea will all be impacted negatively by the tariffs as they now include consumer products like iPhones.

The Fed may have just drawn a line in the sand for the market. If Wednesday was the one and only cut this year and the tariffs cause a slowdown in corporate investment, a recession may be in its early stages. Let’s not forget that the yield curve has warned us of a slowdown coming so how the stock market behaves in the coming weeks will be very telling on the market’s outlook for prospective growth to close out 2019.

Big brother is watching you! At least he is in London and Beijing. Facial recognition technology is becoming ubiquitous for some cities as governments use facial recognition to identify criminals and terrorists. However, China’s communistic government also uses this technology to rank the behavior of law-abiding citizens for their ‘social credit system’ that will be implemented by 2020.