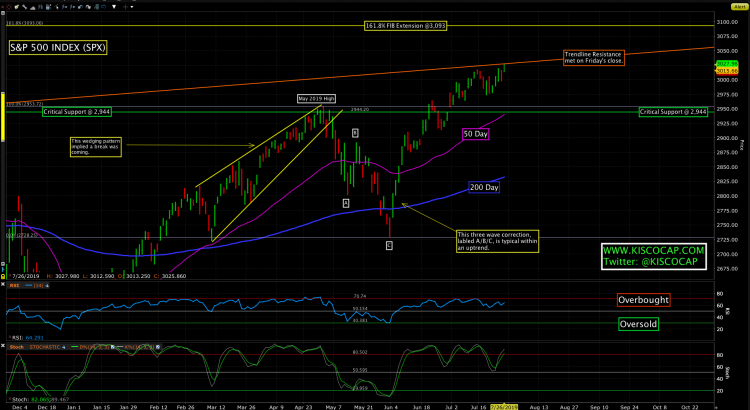 Summer trading is here and so is the Fed’s next policy announcement which will be released on Wednesday. Expectations are that the Fed will anoint the markets with a 0.25% rate cut as “insurance” against a rising risk of slowing growth and trade tensions. However, this move is largely symbolic now as the fear of a GDP slowdown for Q2 was abated with a higher than expected release this week at 2.1%. Slower than Q1 but far from a problematic trend. Some traders are still expecting 0.5% rate cut this week but I think that is wishful thinking at this point as earnings reports don’t warn of a meltdown and economic growth is steady.

The S&P 500 Index chart below shows we are breaking out to new new all-time highs after going nowhere for 18 months. Many have been calling this a multi-year top but it may have just been a larger consolidation period before the next uptrend in this index. The momentum indicators in the bottom of the chart are not running “too hot” or in overbought territory so we may just continue to trend higher after the Fed meeting. I continue to see many in the media express concern of a top in the making but that is a rarity after breaking out from an 18 month consolidation period.

Fortunately, the chart has made it easy to identify where there is a concern of a larger correction. The former triple-top at 2,944 marks the breakout level and is now a critical support area for the S&P 500. The chart below takes the latest correction from early June and projects out the next resistance point at the top of the chart at 3,093 based on a Fibonacci extension of 161.8%. Notable is the trend line where we closed on Friday which may act as resistance into the Fed meeting.

As you can see below, ultra-low interest rates have spurred on massive debt loads across the board. Does this make the Fed nervous? The next debt cycle is sure to be a doozy. Even tech companies that don’t need the cash have taken on large debt loads thanks to the low cost of issuance.