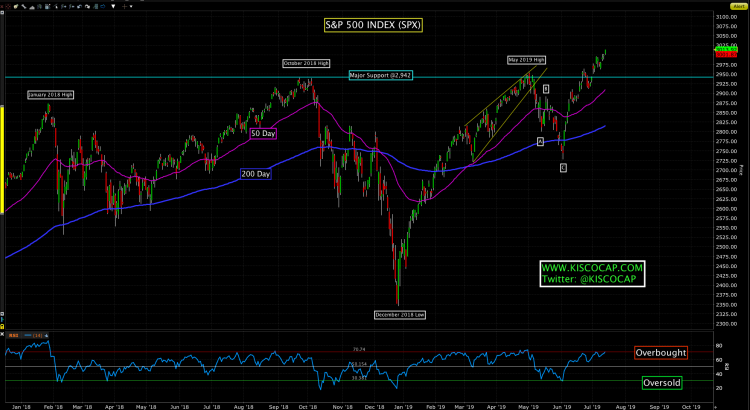 The Fed has made its intentions clear and we can expect a reduction in interest rates at the end of this month. The Fed sentiment chart below illustrates how the Fed has flipped from its stance last October when higher interest rates (Hawkish) were going to be the new normal. The stock market put a full-stop on this policy.

The Market has largely been rangebound since the parabolic high in January of 2018 and is now breaking out to higher prices. The chart below shows the S&P 500 pushing above this range in what may be a new uptrend which may last several months.

How long can the Fed keep up this game? Longer than you think or want. If we look at the price of the S&P 500 to tangible book value we can observe a record high multiple. Notice that we have surpassed the peak in 1998 – perhaps intellectual property like software is being overpriced? Perhaps. There are examples like cloud based computing companies which are all software and are beginning to generating positive free cash flow (which is tangible). But the chart below keeps things in perspective as bull markets like 1998 can way overshoot reality.

Earnings season will get going next week as nearly 60 companies in the S&P 500 are expected to report results including the big banks, Netflix, Microsoft, Schlumberger and Johnson & Johnson. Expectations for earnings are low as economists have ratcheted down GDP growth for Q2 so the bar has been set low which means the market will be forgiving with poor numbers. In essence, the Fed has put training wheels on the stock market so it will be hard for it to fall down – no helmet required.

That is all for now until next week’s Market Update – thanks for reading!