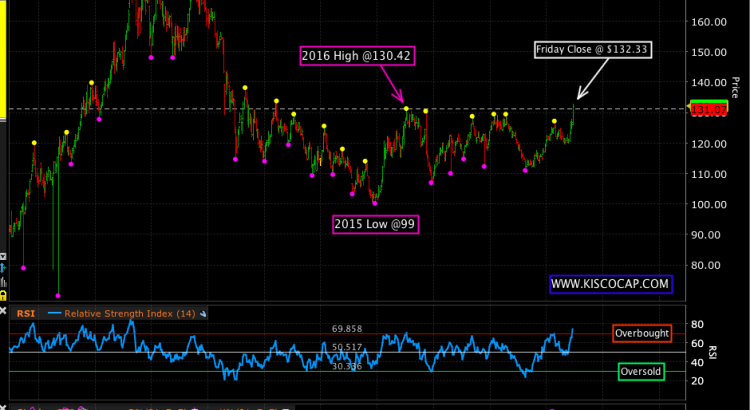 We all got a big sniff of stimulus this week as the Fed didn’t move rates on Wednesday in their June meeting but let the market know interest rate cuts were likely later this year. Think of it as a halftime pep talk for the stock market – turn on those machines and get out there and buy ’em!

Stocks lifted nicely to new all-time highs on the S&P.

The dollar weakened and gold soared on the Fed news and is now breaking multi-year resistance.

Don’t forget bonds – they rallied, too! Yep, everything went higher after the Fed. The chart shows yields falling (prices higher) since last October.

It was only a matter of time before the Fed made this move after raising rates last year. Until central banks in Asia and Europe follow the Fed in raising rates, the differentials in currencies (PPP) put our trading partners in a precarious position. You may not know this but many countries and foreign countries issue debt in US dollars despite transacting in their local currency. If the US dollar strengthens it makes it much harder to repay their dollar denominated debt as their local currency depreciates. It is almost as though the principal balance of their debt rises as their local currency depreciates.

When the Fed raises rates like last October, dollar assets like stocks get sold as US dollars are needed to fund debt obligations. It gets complicated but that is how or why money flows among countries. In other words, the Fed is the world’s central bank and can no longer act as an insular entity that manages only the U.S. economy. At this point in history, the Fed raising rates creates a negative feedback loop with our trading partners that can’t be avoided. At least they have tested the markets over the last year and now know the sensitivity of their policy changes on the equilibrium among the major economies.

The Fed will provide stimulus because they have to. The U.S. economy probably doesn’t need a shot of stimulus right now but our central bank needs to play ball and just advance the runner.

Looks like the teens don’t need that fake ID anymore….

Thanks for reading and hit me up at the email below if you ever want to talk about the markets.