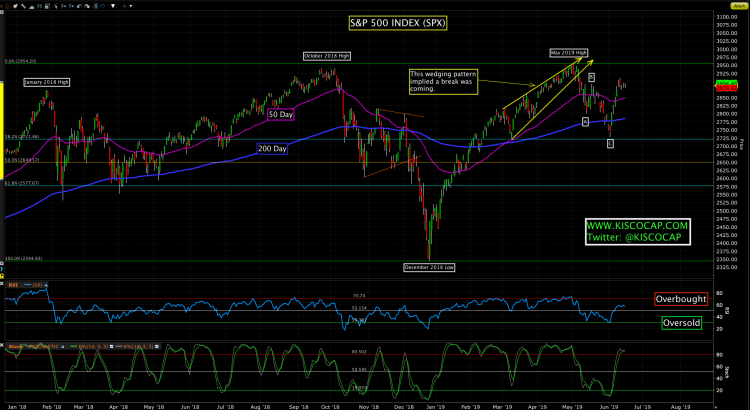 The S&P 500 ended up unchanged on the week as it consolidates before the Fed on Wednesday.

The Fed has reversed course over the last year as trade tensions have flipped the Fed into accommodative territory and the market now expects rate cuts. The chart below illustrates the dramatic shift in expectations after Fed Governor Bullard let the cat out of the bag earlier this month with dovish commentary during an interview. Indeed, if the Fed cuts rates on Wednesday, the stock market remains the master it is feeding….but you probably knew that already.

Unfortunately, rate cuts typically precede recessions but we have to wait until next week to see what happens next. The inversion in the yield curve also screams of a slowdown coming (see more below) inside of two years – maybe near the 2020 election. However, in no time in history has the Fed held rates this low and maintained a balance sheet this big prior to a recession. Could this act as some kind of buffer for the stock market if we do hit recession? My initial thought is no as inertia has its own set of rules but we are in unchartered territory with the Fed’s policies over the last 10 years so I am willing to be patient and open minded. If the Fed delivers next week with a rate cut and the S&P takes out its previous high then it will be a good summer for the stock market.

What could throw cold water on the Fed afterparty? Inflation. If we see inflation spike next year (pick a reason) then the Fed would be forced to raise rates and then the bull market would end with one big hangover.

“The term spread or the difference between long-term and short-term interest rates is a strikingly accurate predictor of future economic activity”, Michael D. Bauer and Thomas M. Mertens found in a 2018 Federal Reserve research paper, adding that “every U.S. recession in the past 60 years was preceded by a negative term spread, that is, an inverted yield curve”.

THANKS FOR READING! Feel free to reach out if there is anything you want to discuss about the markets, your portfolio (for clients) or if you would like a copy of the firm’s brochure if you are not a client.