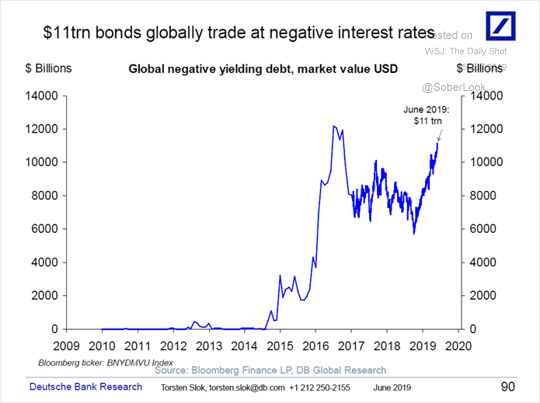 In the Chart: The December low was marked by a shift in Fed policy which caused a straight shot higher with few pullbacks until a wedge pattern formed in April that gave way to a month long correction in May. The May correction (labeled A-B-C) almost touched the 38.2% retracement level on Monday which coincided with the Fed’s James Bullard commenting that accommodative policy would be appropriate if the trade war with China persisted. Several other Fed governors fell in line with these comments as the two week quiet period the Fed observes before all its meetings started on Wednesday (their next release is on June 19th).

No doubt, the Fed got worried this correction would accelerate if the jobs numbers were weak on Friday – and they were (details below). The Fed has given the market a catalyst for higher prices which we have seen many times over the last 10 years. Good chance that Monday’s reversal continues and makes new all-time highs in the coming weeks. All eyes are now on the Fed’s June 19th meeting with hopes of an accommodative stance and signs of a rate cut.

Sounds like good news for the market but a longer-term perspective would bring to light that rate cuts mark the end of a business cycle. There is a lot of credit risk built into the system and the bond market is worried as US Treasury bond yields kept dropping this week despite the stock market reversal. The yield curve remains inverted which screams a slowdown is coming, too. Anything could happen now. The rate cuts in 2007 marked a top in the stock market but the 1998 rate cuts sparked a blow-off top where the NASDAQ doubled in 1999 and then topped in March of 2000.

Lithium is one of the most important raw materials used in battery technology. It will become even more important once the e-mobility revolution continues in the coming years.

The chart below shows how much debt is trading at negative yields which began as a trend in 2014. As you can see there is another leg up happening now that started in late 2018 – right when the S&P 500 bottomed. It is also when the Fed signaled an end to their rate hiking cycle which was taken as a sign of weakness as the bond market bid up prices right into negative yield territory. Most of this debt is found in Europe and Japan but the chart below is a longer-term warning sign that credit risk is rising and that the next recession will be felt around the globe. It doesn’t tell you when it will happen, however. Just know that rising stock market prices don’t tell the whole story about the health of all markets. At some point, they will all converge.

That is all for now until next week’s Market Update. Thanks for reading and don’t hesitate to reach out if you have any questions.