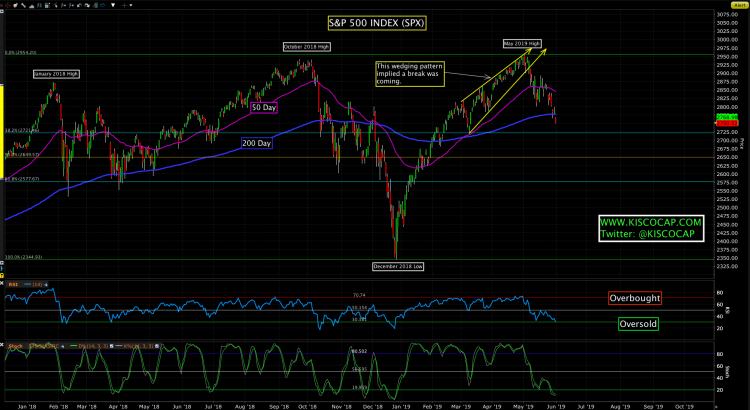 The month of May was not kind to the stock market as the move from the lows in December are now being corrected. How far will it go? We closed below the 200 day on Friday in a sign of sellers controlling the S&P 500 index. We tapped on oversold levels in the chart below, however, we still have some room to go on the downside before hitting some key support levels. In other words, it is possible to see an acceleration to the downside next week despite the oversold levels.

This last leg lower to close the week was driven by the administration and their threat of tariffs against Mexico regarding border security. Not much on details but this kind of tariff affects the states of Texas and California the most.

It doesn’t help that China plays by its own rules and may cut-off the United States from things like rare earth metals (see below) which could cause a massive disruption in the supply chain of many manufacturers. Companies like Tesla would be unable to manufacture batteries and would likely shut-down their operation, for example.

One area of strength has been the US Treasury market. Longer-term 10s & 30s have been very well bid this week as the belly of the curve dips below 2%. This type of action in Treasuries are rare and indicate that a slowdown in the economy is in the cards later this year.

It is a waiting game at this point as there are no fundamental catalysts to get the market moving higher. The trade tensions and tariffs are raising the price of goods and changing how CEOs run their companies. China plays the 100 year game while the U.S. has election cycles so this could last longer than we all expect.

The online advertising market shows no signs of slowing down. Some formats, such as online video and social media are seeing growth rates north of 22%, as brands are shifting their budgets to match changes in media consumption. As consumers are spending more and more time on mobile devices, advertising dollars are moving to mobile inventory as well. In 2018, mobile ads accounted for 65% of total digital ad revenues, up from only 9% in 2012.

That is all for now until next week’s Market Update – thanks for reading!