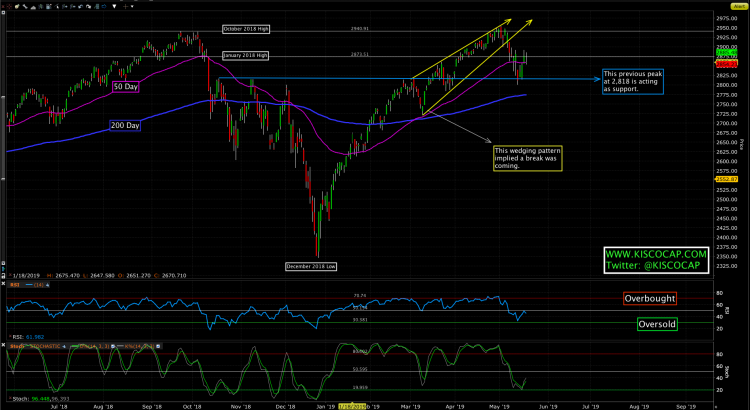 The mirage of a new trade regime with China has dissipated. Both sides are beating their chests in a show of strength through tariffs and a disregard for unintended consequences. A confident spirit lives within both sides as global stock markets have rebounded from the December lows giving trade negotiators a shot of courage.

However, the markets have a will of their own and show no quarter to those that rock the boat. Remember when the Fed raised rates last October? Remember when they reversed course in December? I expect nothing less of the markets so don’t be surprised if a downside move begins that brings all parties back to the negotiating table. The trade battle with China may be worth it over the long term but it will impact GDP growth and inject more volatility in the financial markets.

As you can see below, the S&P 500 index (SPX) bounced in December and has experienced only a couple of minor pullbacks since a high achieved earlier this month. We broke a bearish wedge pattern (yellow lines) and are now in what may be the early stages of a larger correction in the coming weeks. The S&P 500 worked off an oversold condition this week so the door is open to further declines. If we break 2,818 in the chart then a move down to the 2,700 area would be the next area of support. There was some signs of weakness on the close on Friday so don’t be surprised to see a weak open to start next week.

I think these assets have satisfied the Fed’s 2% inflation target.

That is all for now until next week’s Market Update. Thanks for reading!