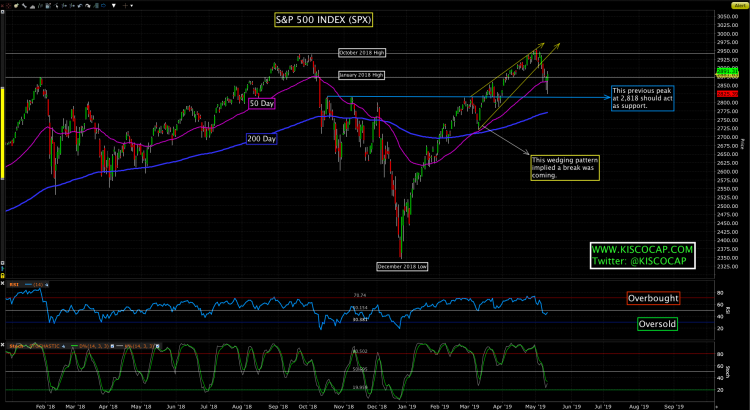 We closed last week on a positive tone with equities poised to break higher but uncertainty around trade talks with China pushed stocks to work lower all week. It is clear after this week that the markets want a trade deal with China as tariffs will likely be a drag on economic activity. The tariffs are already causing problems evidenced by some farmers that are under duress as soybean exports are now closed to China while milk and pork exports have dropped. I would expect to see more releases from corporate America about the effects of the new tariffs in the coming weeks in particular the manufacturing sector. This leaves us in tariff limbo as this situation will not change anytime soon as both sides have exhausted this round of talks and are willing to take their ball and bat and go home. No deal.

Below is a list of sectors that are projected to be the most impacted by retaliatory tariffs by China:

What is the next catalyst for this market? The Fed has stopped raising rates, the yield curve inverted this year (bad) and earnings are not so great in comparison to 2018. A trade deal with China could have gone a long way for another leg up in stocks but that is off the table now. There are now several unknowns that arise with no-deal. For example, many semiconductor and cloud computing companies generate a significant amount of their revenues from China. What happens there?

The lack of catalysts means the market will be the news going forward – ignore all the tweets. In the chart below, we broke the wedge pattern on Monday and found support near the 50 day (magenta line) to close out the week. We have options expiration next week (usually bullish) so a little more corrective rally is to be expected in the coming sessions. Longer-term, stocks have not been tested in many months so this could be the start of a larger pullback.

On a side-note, the IPO market has been busy. Many of the private large-cap tech companies are using the rally from the December low to price their IPOs and get it done before the party is over. In particular, the UBER IPO priced on Friday but it went very badly. First, the size of the deal was huge as $8B in stock priced among an IPO market that prices deals on average under $500mm. There was also little support from instituions in a warning sign of an overpriced deal. The talk was $45-$50 but ended up pricing at $42 and closed the trading day at $41.51. It didn’t help that its main competitor, LYFT, is down 42% from its opening print in early April. I thought the chart below was interesting. What happens in a downturn when everyone stops going out for dinner?

That is all for now until next week’s Market Update. Thanks for being a reader and good luck out there navigating these markets!