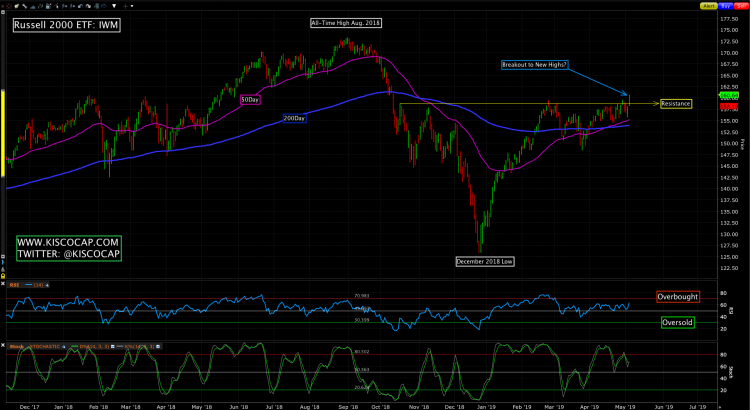 Stocks moved slightly higher this week as we can check on the chart for the S&P 500 index below – not much of a change. The price action has been choppy and has held in a range through all of last week. As you can see by the technical indicators on the bottom, this index is working off an overbought condition.

Overbought conditions can be resolved in one of two ways. The first is a pullback (correction) where a portion of the previous uptrend is retraced. The second is a consolidation period where prices move sideways before breaking out to higher prices which is what may be happening now with the S&P 500.

I say this because the Russell 2000 (small caps/growth) looks to be breaking out from a consolidation period that began in early February. At first, it looked as though this index was stalling out but after three months of sideways action we should have corrected by now. The last bar in the chart below is from Friday and is a significant development as this is the best close since last October when the S&P 500 topped. You can also see how this index has not made new highs in recent weeks like the NASDAQ and S&P so this is the index to watch right now. Normally, you want to see growth indices like the Russell and NASDAQ leading the pack higher so maybe the Russell will exert some leadership into the summer months. The Russell’s recent chart pattern may be foreshadowing a consolidation period and a move higher for the other major indices which would put the October correction firmly in the rearview mirror.

Aside from the technicals, there are a lot of cross-currents in the macro markets these days. Europe is weak, China is injecting stimulus, the US policies for capital investment may (or may not) be coming to fruition while nobody cares about Japan’s central bank overreach (for now). Sprinkle in a Fed that is leaving the yield curve alone and maybe a melt-up scenario is in the works. I read that a trade deal with China may be announced in early June so that bit of good news is in the pipeline, too.

In 2018, total global military expenditures rose 2.6% to $1.8T, according to new data from the Stockholm International Peace Research Institute (SIPRI). It has reached its highest level since 1988 as well as being 76% higher than the post cold war low of 1998.

That is all for now until next week’s Market Update. Thanks for reading!