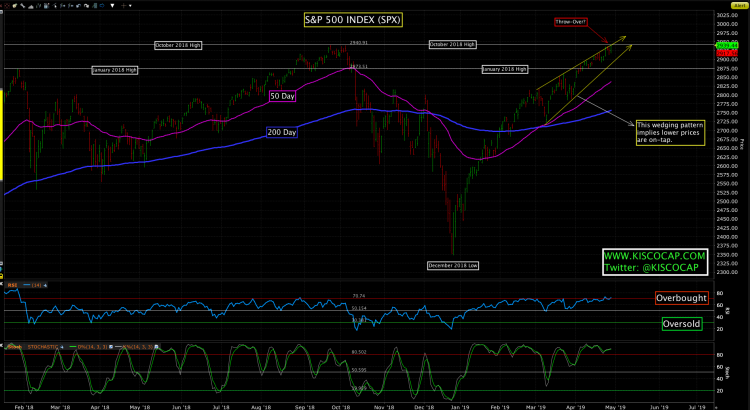 We had a mini melt-up on Tuesday in the stock market based on earnings and continued optimism over Fed policy. The bar was set low for earnings this quarter so we are seeing companies beat expectations but fall short of good growth on a year over year basis. This puts the market at risk of overshooting on valuations as we exceed the top that was achieved last October. As you will see below in the economics section, the GDP number released on Friday looks good only on the surface while projections for Q2 growth are nowhere near as rosy.

In the chart below, we closed at the intra-day high from last October to create a new closing high for the S&P 500 index. It is common for the technicals to test previous highs and lows so now we wait to see if there is follow-through in the coming weeks. In general, there has not been a meaningful test of this uptrend since the December low so we are due for an upcoming corrective move in the coming weeks. The technical conditions are screaming overbought here but the market keeps finding a way to inch higher so patience is best here.

Below is another chart which warrants caution at these levels. The VIX is an index that tracks the volatility of stocks. As you can see, traders like to short this index as stocks trend higher – this is represented by the red area below the zero line. At times, everybody loads up in the same direction creating a spike in speculation as you can see below in Q4 2017, Q3 2018 and at present. This dynamic lays a high probability for a correction but it does not tell us when, however. These traders lose on their short positions when prices in stocks fall so there could be a very sharp spike in volatility during the next correction.

It will be interesting to see how much longer this interplay between volatility and stocks will continue. Here is what to watch for next week:

The White House has announced it will end exemptions from sanctions for countries buying oil from Iran. Waivers for China, India, Japan, South Korea and Turkey are set to expire in May and those countries could face U.S. sanctions themselves. The U.S. move is aimed at significantly reducing Iranian oil exports which are the government’s main source of revenue.