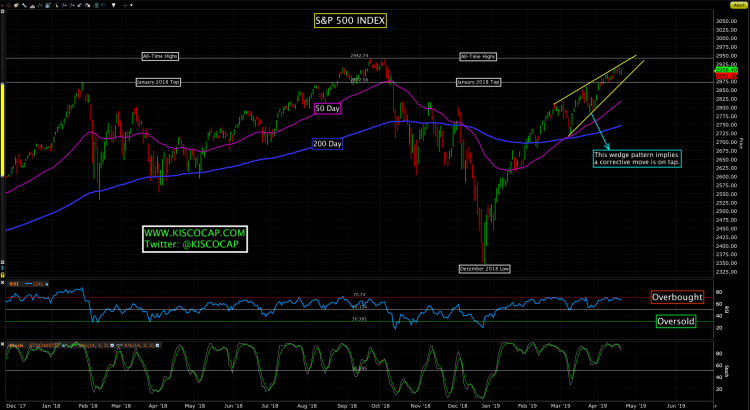 Several IPOs have been launched in the last few weeks at nosebleed valuations fueled by the euphoria over the perception that the Perma-Fed has our back. The latest IPO launched on Thursday was a cloud based video conferencing company named Zoom that was 20x oversubscribed at 48x revenue (more detail below). There is no better evidence of euphoria when you see deals like this come to market. We’ve seen this behavior before in the late 1990s but lets not forget that the NASDAQ doubled in 1999 despite all the crazy valuations. Perhaps, another melt-up phase is in the works but it isn’t my base for the remainder of 2019.

Are we overvalued? We only know the answer to that question after stocks decline. The chart below shows where we are in a historical context. Trillions of dollars have been raised through debt and then recycled back into the stock market through corporate buyback programs to bring us to this point. Sustainable? Will we grow into these valuations? Not at 2% GDP.

The Dumb Money Confidence index from SmartTrader.com has been climbing steadily for a month and has now reached its highest level in a decade. This is also one of the few times since 1999 that this indicator was highly confident about a market rally just two weeks into an earnings reporting month.

No doubt, the technicals are very tired and pointing to exhaustion while the fundamental backdrop weakens across the globe. The S&P 500 finished the week slightly negative and has yet to show signs of a breakout to make new all-time highs. The chart patterns indicate a corrective move may be on tap as evidenced by the wedge pattern below.

However, the continued rally over the last several weeks can’t be blamed on the Fed as they are still withdrawing stimulus from the system. Don’t forget that the program to reduce their balance sheet will remain operational through the Fall. Reducing the balance sheet is akin to raising interest rates so what is going to keep markets chugging higher into the Fall? For now it is euphoric optimism.

New World Health Organization data has revealed that measles cases across the globe have risen 300% in the first three months of 2019 compared to the same period last year. All world regions experienced outbreaks but Africa was the worst impacted with its cases soaring 700%. So far in 2019, 170 countries have reported 112,163 measles cases compared to 163 countries reporting 28,124 cases in the first three months of 2018.

That is all for now until next week’s Market Update. Please reach out to me if there is anything you want to discuss about the markets or if you would like a copy of the firm’s brochure.