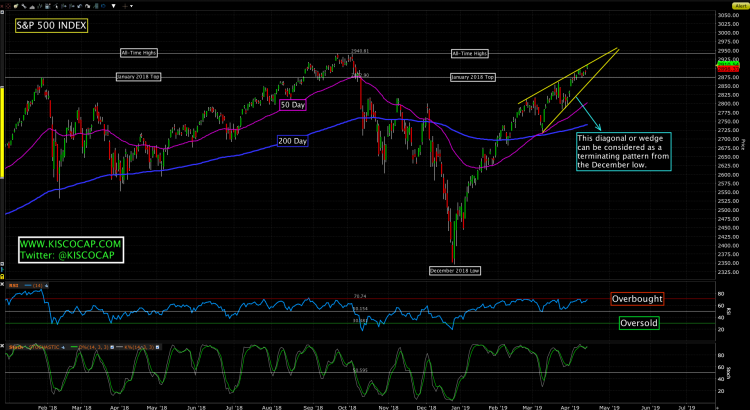 A choppy week in stock markets that ended on a positive note when JP Morgan rallied markets on Friday morning with a positive earnings beat. Bonds yields also moved higher (a good signal for stocks) leaving the market in a grey area of which direction will be the next “big” move.

The S&P 500 closed in the Phantom Zone between the January 2018 high and the all-time high from last September as you will see below. This zone should have stiff resistance as fundamentals have weakened since the last visit. You will also see that an “ending diagonal” appears to be forming that could terminate near the all-time highs. However, this pattern ends with a quick return to the origin or 2,700 in the chart so caution is warranted until this pattern is broken with a move above the upper trend-line.

Now, we wait. If the technicals are more bullish than the chart suggests, there will be a breakout into new all-time highs that could last several months. However, this scenario would likely push the market into a blow-off top scenario that could end the bull market. If the diagonal pattern proves correct then we will see a test of where the market will provide support that gives confidence that a longer-term low was formed in December.