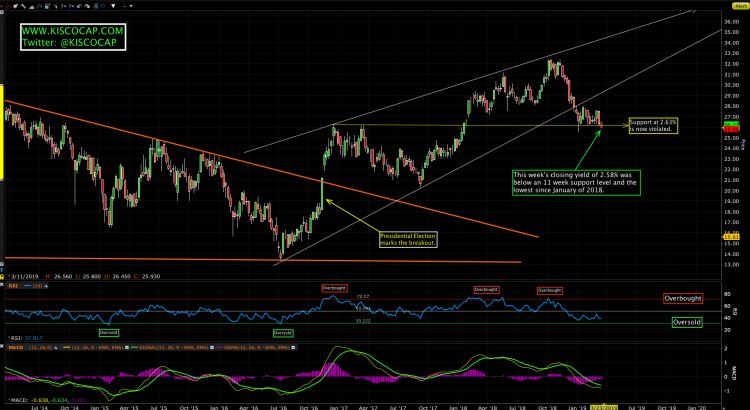 New highs on the S&P 500 were achieved for 2019 on Friday as OPEX (monthly options expiration) delivered again on ramping stocks higher – thanks options traders! The rally (bounce) from the December low is long in the tooth and reaching an extreme measurement (like an Irish Mile) which is calling into question the direction of the next move. Nothing goes in a straight line forever so this leaves the stock market in a vulnerable position for a larger corrective move to the downside.

The chart below shows the S&P 500 index which almost tested the 200 day last week only to rally in near vertical direction into the OPEX close on Friday. There may be a bit more momentum to the upside into the mid 2800s but I would be surprised to see it move much higher without a larger correction. If I am wrong and we keep going higher, then we can party like a euphoric rally out of 1999. Sentiment and economic data across the globe (see below) has been weak so I am putting this scenario as an outlier in the probability spectrum.

Most notable this week was a pronounced divergence from 10YR US Treasury bond yields. As stocks moved higher this week, bond yields moved lower in contradiction to what you want to see with new interim highs in the S&P 500. The bond market is not buying this rally. In the chart below of 10YR US Treasury yields, you can see we lost support at 2.63% and closed below this level which has held for the last 11 weeks when stocks bottomed in December. The closing yield on the week, 2.58%, is the lowest in 14 months.

HAPPY ST. PATRICK’S DAY!!! That is all for now until next week’s Market Update. If someone forwarded you a copy of this report, you can sign-up directly at www.kiscocap.com.

Please reach out to me if would like a copy of the firm’s brochure at paulmccarthy@kiscocap.com.