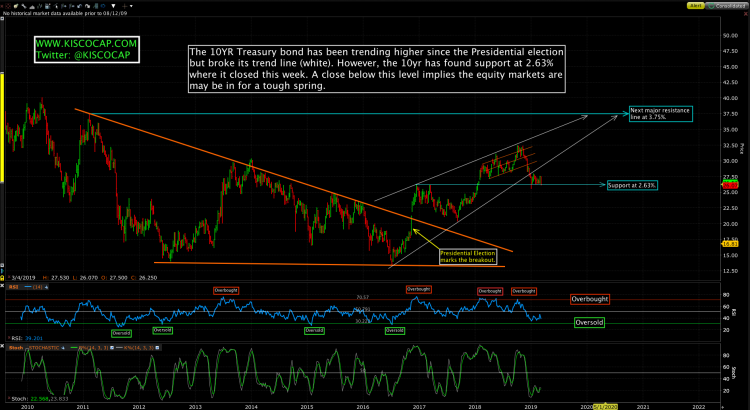 There is a lot to cover this week. If you have been reading my previous posts, I have been tracking 2,818 on the S&P 500 as a major resistance point for a corrective move to begin. After testing this level twice, a corrective move began on Monday and carried through Friday.

I expect this corrective move to last through March but next week is OPEX (Options EXpiration on Friday) which typically gives a lift to equity markets. So, expect a short-term rally of some kind before a more impulsive move to the downside begins (maybe after next week). Strong support should be found around 2,600 in the chart which I think is tested later this month.

The bond market is also sending some signals of its own as we are seeing an inversion in the belly of the curve as you can see below. The column on the right are yields for the corresponding bond maturities. 5YR Treasuries are yielding lower than 6 month t-bills! A sure sign of a late cycle situation. No red flag just yet but this is something to watch in the coming months.

Now, let’s take a look at the index for 10YR Treasury yields over the last several years, below.

As you can see, the 2.63% is a key technical level to hold in the chart. If we find ourselves with 10YR yields significantly below this level, then something larger is lurking for the US economy.

Late cycle warnings are emerging and there is no more glaring signal then the ECB’s policy decision this week. After an attempt at removing stimulus measures late in 2018, Europe’s central bank reversed course on Thursday (more below) and flipped to providing stimulus measures for the Euro zone. No doubt, the global macro picture is starting to wobble.

In the coming weeks/months, I expect we will find a bottom near 2,600 and then one more run at new all-time highs later this year. I think a good bet is that the Fed will follow the ECB if the S&P gets ugly enough in the coming weeks (they did blink in December). Also, any kind of deal with China would spark another round of enthusiasm towards buying US stocks as Japan and Europe are showing little to no growth.

That is all for now until next week’s Market Update. If you would like a copy of the firm’s brochure, you can contact me directly at the email below. Thanks for reading!