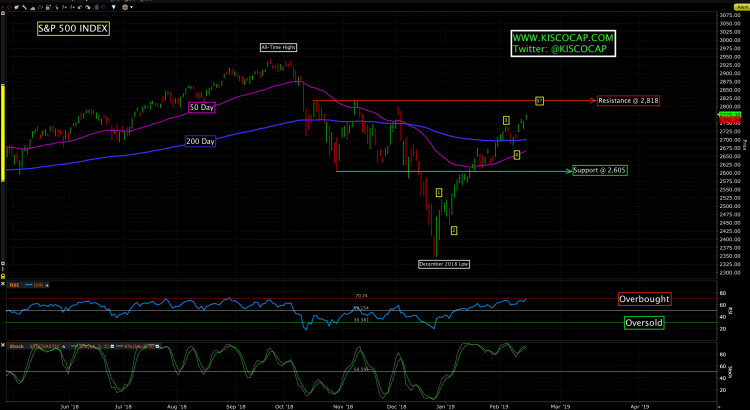 Due to some travel plans I just had a few minutes for the post this week. Also, there will be no blog post for next week. Thanks for reading!

The broader indices have been moving deeper into a major zone of technical resistance. Last week it looked as though we topped out but the 200 day held and now we are being pulled up into the upper end of a resistance zone like a magnet. The chart below outlines this area where overbought conditions are materializing which should cause a corrective move to the downside fairly soon. See below:

We also have seen low put/call ratios in the options-market like we did in the days leading up to the first plunge off of the all-time high last September. Low readings of this ratio show complacency in the stock market and warn that the uptrend from the December low is weakening. Where does it stop?

This zone of resistance exists as buyers from last October and November will use 2,818 or higher as an opportunity to exit their positions at a profit. This type of dynamic occurs frequently in the stock market but as you can see in the chart, this pattern has been in the making for many months which ensures major resistance as we approach 2,818. Plausible that traders are trying to short the market here and get it wrong which causes a short-covering wave that propels the market through 2,818 and maybe up to the 2,840 area (just a thought). That would be a good spot to grab some popcorn and watch the fireworks unfold.

Longer-term, this move from December has been a good indication that we will see new all-time highs in 2019 but not without a major correction first. I’ll give some projections once we confirm an interim top in the next week or so but the 2,600 area should be major support.

Volatility is back, the Fed is on the sidelines and all the negative headlines from December are becoming positive catalysts. We are still late cycle but there may be one more good year of stock market performance before it is all said and done for this business cycle.