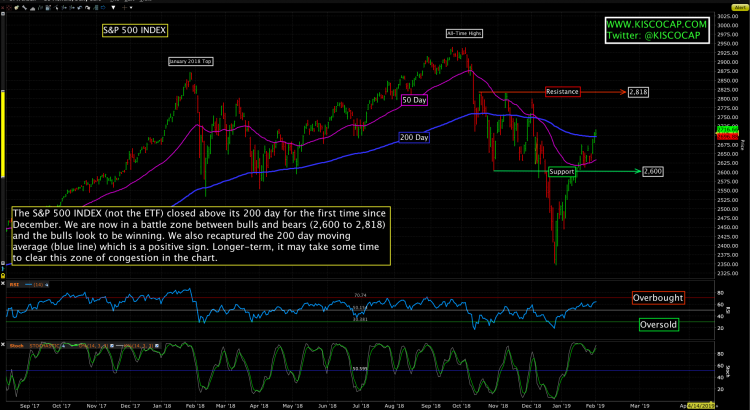 The Fed is stepping out of the picture with a hug and a kiss. On Wednesday, Fed Chair Powell, commented that they may have made a mistake and will hit the brakes on their tightening policy due to concerns that the economy could be slowing. Ironically, just two days later, the jobs report on Friday revealed much better than expected results (see more below) which would have given the Fed cover to maintain their tightening policy. The Fed folded their hand too soon. Thanks for playing, Mr. Powell but the stock market has called your hand. The people at the Fed have reacted in an automatic and predictable fashion to volatility – some day gravity will have its way.

The government shutdown has come to a close and the data is not showing any major damage to the economy. Recent headlines claim the President will likely use emergency monies to fund a border wall so I don’t think a redux of the government shutdown will happen in February. China negotiations are the next shoe to drop from a policy perspective but I think these talks will go on for several months.

Earnings season continues and it wouldn’t surprise me if companies that disappointed get a pass on Q4 performance as the market chalks it up to a Fed induced hiccup. The technicals below are showing a positive picture and the potential for continued upside progress in the coming months is continuing to grow.

Two charts that are highly relevant this week: