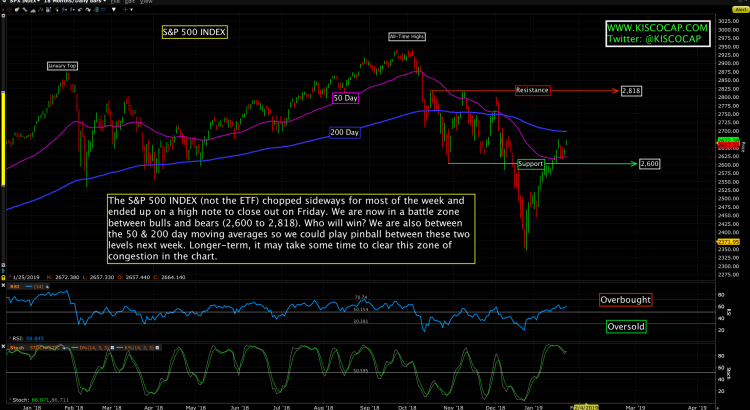 As central banks have back-pedaled on their tightening polices, stocks have continued higher in unabated fashion since December. We are now above a key support level (2,600) which should hold if stocks are to continue higher into the spring.

It is easy to recognize the correlation of the stock market to Fed policies which is a bit scary considering valuation metrics with risk assets. What are stocks and junk bonds worth AFTER the central banks raise interest rates and shrink their balance sheets? That could be an ugly picture for the weak links out there relying on debt to finance growth. Seems as though the December plunge in stocks and junk bonds caused the Fed to tap the brakes. One thing they can’t put back in the bottle is that a spotlight was shined on the weakening nature of credit in the bond markets. No doubt, the seeds of the next recession.

The next Fed meeting is coming up this week where we will be tantalized with another press release on Wednesday at 2pm where the Fed is expected to do nothing. Their forward guidance is more important and will likely be toned down as they need the markets to work-off their December hangover before re-engaging the quantitative tightening gears.

France and Germany have signed an historic friendship treaty in Aachen. Amid Brexit, rising populism and Euroscepticism, both countries agreed to issue joint statements on key EU issues, deepen economic integration and enhance defensive cooperation. German Chancellor Angela Merkel said that the aim of the pact is a “German-French economic area with common rules” and “a common military culture” which could “contribute to the creation of a European army”. Some labeled the treaty symbolic and irrelevant while others accused both governments of signing away their national sovereignty.