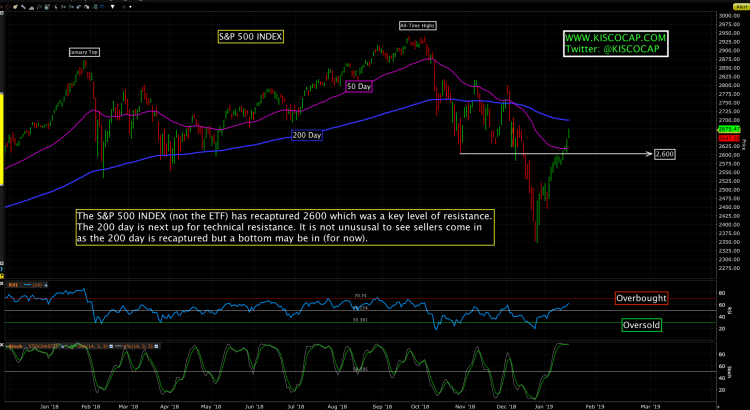 Stocks finished on a good note this week as a key technical level was recaptured in the S&P 500 (2,600). See below:

We are not out of the woods yet but the technicals over the last few weeks are undeniably favorable to calling the Christmas low a bottom. It may not feel like a bottom as much in the news cycle has been negative. No doubt, growth is slowing and we are probably seeing the early warning signs of a credit cycle brought on by a tightening policy by central banks. But there may be a window where some of the current concerns in the market are alleviated and the market pops to one more new high.

Is there precedent for this type of environment? Well, if you look at the years leading up to the 2008 financial crisis: real estate prices topped in 2005; sub-prime mortgages started defaulting in late 2006; the stock market topped in 2007 which eventually lead to a crash in 2008. Hard to say where we are in comparison but are getting closer to the end of this business cycle.

What might be the Positive Signals in the coming weeks:

What are the Negative Signals:

So, short-term we probably have a bottom in stocks which may mean a few good months to new all-time highs. Longer-term, we have some issues. In either case, we can use 2,600 in the chart above as a signal of direction for the stock market.

That is all for now. Please reach out to me if there is anything you want to discuss about the markets, your portfolio (for clients) or if you would like a copy of the firm’s brochure if you are not a client.