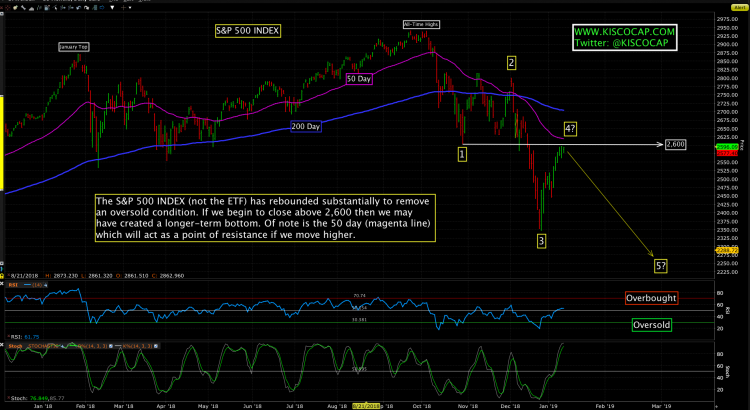 The Fed governors were out and about this week making speeches and back pedaling their December attempt to spit in the face of a collapsing stock market by raising interest rates. In other words, the Fed has blinked and there is no better evidence than the minutes from their December meeting that were released on Wednesday. Now, the “minutes” are NOT a transcript and are used to convey a narrative that the Fed uses to sooth market participants and talk down market volatility when they make a regrettable action. The Fed’s campaign message of patience was loud and clear this week as the Fed can’t maintain credibility if it turns the stock market into a singularity of wealth destruction.

The Fed has imbedded itself into the circuitry of of the stock market for many years and I don’t envy the position of the Fed’s leadership. The incredibly difficult job of taking the punch bowl away while keeping the party going is an impossible task. For the mean time, they may have bought themselves some time and now we are on to earnings season which kicks off next week.

The stock market is up over 10% from the lows and now we have stopped at a key resistance level in the chart below:

There is potential for positive catalysts on the horizon with the government shutdown ending, trade talks with China resolving and with low expectations around earnings (easy hurdle to jump over). However, as the chart shows we are at a critical juncture where the market’s expectation of the Fed’s polarity will influence the next move. The next Fed meeting is January 30th, by the way.

Below is a graphical representation of GDP by county.