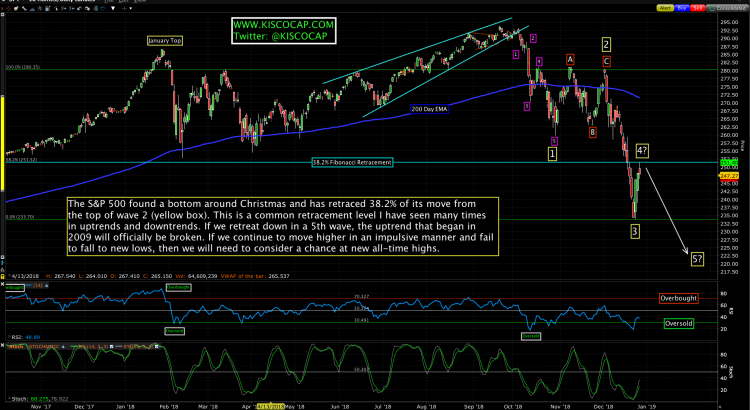 The stock market found a place to bottom this week – no real news event happened just an exhaustion point for sellers. What happens next with the chart patterns will be significant as one more new low will lay the beginnings of a trend change and a bear market for the global stock market.

If the S&P 500 index closes above 2,600 then we will have to entertain that this week’s low will likely hold and that new all-time highs are in store for 2019.

However, in either scenario the seeds are being sown for a rough year in the credit markets as high yield debt has ballooned (see below) and the Fed’s policies will hurt the new issuance calendar. The fundamental catalyst for new highs is likely a trade deal with China but the early look is that the results for any negotiations are weeks away (at best). The technicals are the best analytical tool right now as the fundamental and macro cross-currents between good and bad are running deep right now.

For 2019, interest rates, currency differentials and central bank policies will whip the market into higher levels of volatility. Investors will have to live with this new fact of life as Father Time will denote 2018 as the death of low volatility.

What to watch for Next Week:

As the Fed reduces their balance sheet in 2019, some dates will matter more than others. The chart below shows when large amounts of Treasuries and Mortgage Backed Securities will roll off the Fed’s balance sheet. These numbers are in the billions and it looks like May 1st is the big winner. The reduction in their balance sheet is likely to increase volatility in risk assets (stocks and high-yield bonds).

That is all for now until next week’s Market Update and HAPPY NEW YEAR!