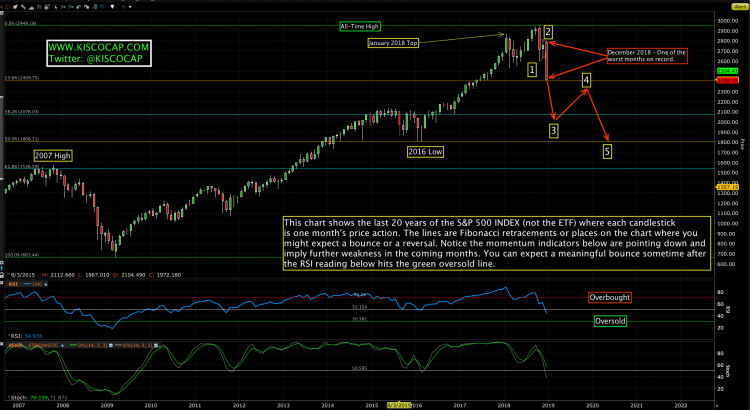 The Fed decision came on Wednesday where there was no relief or change to policy that would be considered friendly to the stock market. The Fed will continue to shrink its balance sheet of bond holdings and look to raise interest rates 2-3x in 2019. In response, stocks continued to slide into the close on Friday.

The magnitude of this correction is becoming quite large and implies that the stock market made a top in 2018 and is correcting the rise from the 2009 low. The chart below is the S&P 500 index ($SPX) over the last 20 years. In technical analysis we can use the retracement levels you have seen me use on shorter time frame charts for longer time frames to identify potential price levels where there may be support. So, the chart below is a “monthly” chart where each candlestick represents one month of price action. As you can see, this month’s candlestick is the biggest on the chart that tells me this correction is just getting started. The 5 wave pattern I have outlined is a common pattern called an Elliott Wave that unfolds in 5 segments. It looks as though we are in the 3rd wave which typically has the highest level of intensity and price movement. On Friday, the S&P 500 closed at the 23.6% Fibonacci retracement on Friday, however, the most likely level of major support is at 38.2% which is near the highs of 2015. We’ll see how this plays out but I think this analysis gives you an idea of what to expect in the coming weeks/months.

One thing is clear, the Fed is not coming to the rescue. Jerome Powell’s Fed is popping all the bubbles.

The Fed is shrinking a $4 trillion bond portfolio as part of their “Quantitative Tightening” program. The Fed’s holdings have fallen to $4.1 trillion from $4.5 trillion a year ago and are set to reach $3.6 trillion over the coming 12 months. The Fed’s program of buying bonds has been the lifeblood of the stock market as this money has largely been recycled back into the stock market via share buybacks. Now comes the reversal..