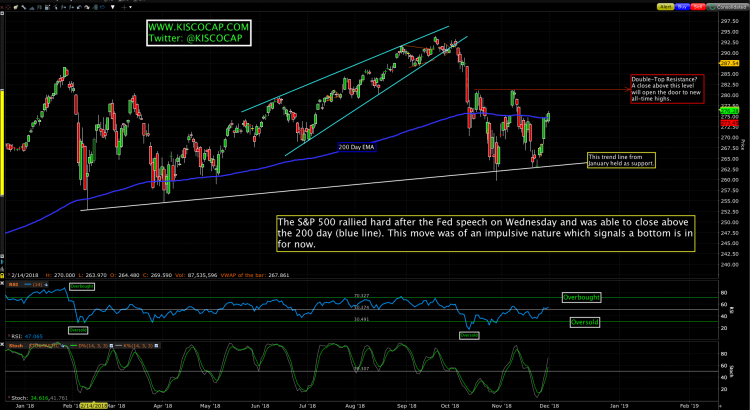 Chairman of the Federal Reserve, Jerome Powell, gave a speech last Wednesday where he hinted that perhaps there would be fewer interest rate increases than the markets were expecting. This caused a massive rally in equities that removed bearish sentiment and gave stocks an impulsive advance that removed the weak technical outlook. However, the cherry on top is that the G-20 meeting this weekend was a success in that the U.S. and China will take a 90 day “time-out” to evaluate their trading relationship. That means no 25% tariffs on Chinese goods that would have started today. So, the stock market got what it needed for a Santa Claus rally for what is a seasonally strong part of the calendar.

The Fed has a meeting on December 19th where they are expected to raise rates one last time for 2018. Perhaps, the Fed will give us additional clarity on interest rates but I doubt they do anything to change their policy on the size of their balance sheet which is more important in my opinion given its size. If at any point we make new all-time highs this month, stocks will likely stay strong into the first quarter where we can re-visit the trading relationship between China and the United States.

The US corporate bond market has entered a bear market after hitting a peak in February, warned Morgan Stanley. Analysts at the investment bank said 2017 proved to be the “Goldilocks” year for the credit market, as economic growth expectations brightened and investors looked forward to US tax cuts and a relatively accommodative Federal Reserve. But technical challenges began to appear in 2018 with the Fed “stepping harder on the brakes,” chasing more investors away from the US bond market. Market fundamentals are expected to worsen next year. Morgan Stanley’s analysts noted that monetary policy has turned hawkish and should near “restrictive territory” for the first time in this cycle. Also, tailwinds from a booming US economy are beginning to dissipate while earnings growth slows, they said.