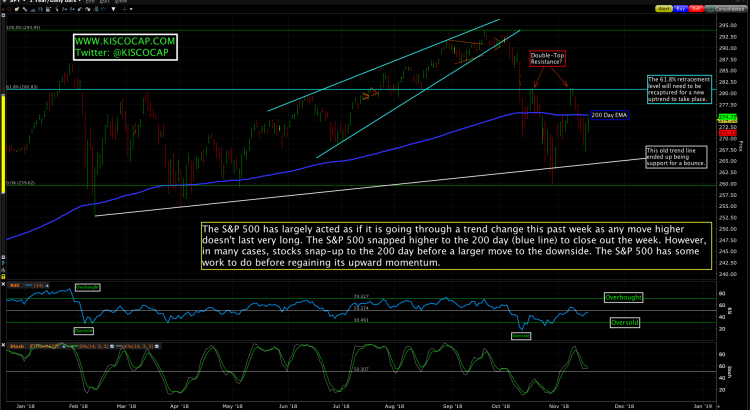 There are no good vibes in the stock market right now. This past earnings season had several companies beat expectations but guide lower on revenue going forward which is a sign that growth is waining in the global economy. Some of the strongest stocks over the last few years have been taken to the woodshed like Nvidia (they make computer chips) which was down 19% on Friday after their earning release Thursday evening (record earnings, I believe). Being down that much means that the dip buyers have left the building.

The price of oil has also dropped 27% (from $77 to $56) since the October 3rd high in what may be a foreboding sign for the global economy. When economic activity is rising, demand for oil increases, and oil prices tend to go up.  But when economic activity is slowing down, demand for oil diminishes, and oil prices tend to go down. This dynamic may be a symptom of what is to come but that may be a question for 2019.

The chart below of the S&P 500 largely looks the same as the other major indices so everything is correlating to the same price action. Good or bad? Depends on what happens next.

Underwriting standards and credit quality have deteriorated in the high yield debt markets. In the United States, the most highly indebted speculative grade firms now account for a larger share of new issuance than before the financial crisis. New deals also include fewer investor protections, these so-called covenant-lite loans account for up to 80% of new loans up from 30% in 2007. With rising leverage, weakening investor protections, and eroding debt cushions, average recovery rates for defaulted loans have fallen to 69% from the pre-crisis average of 82%. A sharp rise in defaults could have a large negative impact on the real economy given the importance of leveraged loans as a source of corporate funding. (IMF)