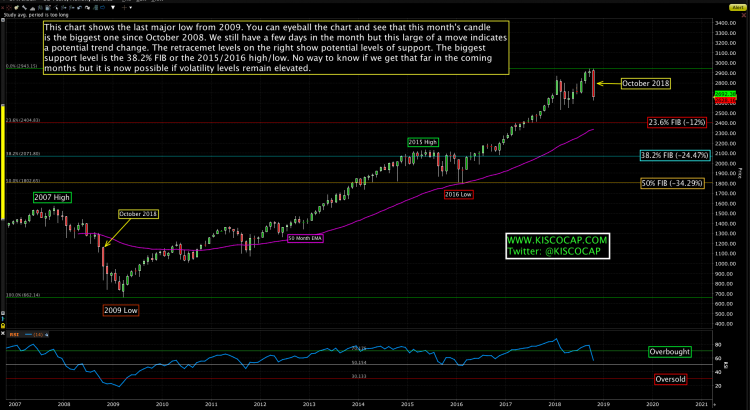 The Fed has marked a top with the end of quantitative easing  – don’t expect it to end anytime soon. Economic data is good, unemployment is low and inflation is rising but not enough for the Fed to be alarmed. So what is the Fed doing under Chairman Powell? They are normalizing interest rates that were too low for too long. No matter how they normalize, something will go down in price and in this case that is the stock market as the Fed withdraws liquidity from the financial system.

The Fed’s policies have suppressed equity volatility over much of the last 10 years in order to create a wealth effect (and wealth disparity). Mission accomplished. Now, how much will they take back? The Fed is not afraid of stocks moving lower as the rubber hits the road for the Fed when there is credit contraction and a lack of lenders. Keeping the lending machines going is more important than pumping up stock prices. The Fed may not even care if we lose some growth as long as the bond and credit markets keep working.

My prediction, the Fed won’t stop until they sniff a credit event. But keep the big picture in mind as all markets are interconnected and raising interest rates causes larger interest rate differentials between the U.S., Japan and Europe. These differentials are affecting corporate America too as evidenced by Anheuser-Busch InBev’s 50% dividend cut this past week due to currencies losses on overseas operations. And let’s not forget Europe’s weak banking system or the emerging markets that could kick-off the next series of credit events across the globe. I could get into the Trillions of notional in derivative contracts that exist between financial institutions but that is a conversation for the next credit crisis.

Time to look at some charts. I am dialing out to the multi-year charts where each candlestick is one month’s worth of price action. Normally, the monthly moves don’t show much change but the last few weeks have changed things. The current correction (or bear market) is starting to show up quite clearly as you can see below:

The S&P 500 Index monthly chart has yet to reach an oversold condition:

The Russell 2000 had its worst month this cycle:

Here is the NASDAQ Index:

Chart of the Day!

It looks as though Amazon’s chart reflects this strength: