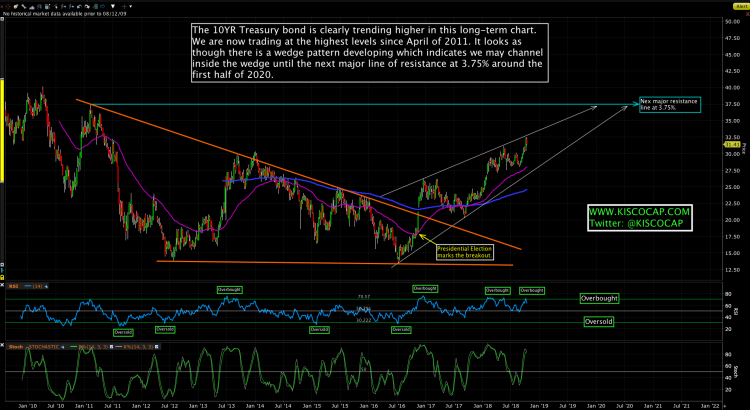 The fall in the stock markets this week is a result of the Federal Reserve withdrawing liquidity from the monetary system. Capital markets work based on liquidity and flows. When excess liquidity is pumped into the system it goes into risk assets, like stocks. And now that process is in reverse. Ultra-low interest rates have been the state of affairs for too many years and now the Fed is reducing its balance sheet and raising interest rates. The U.S. markets have been largely unaffected until this week aside from a tremor that occurred in January.

The 10YR Treasury bond moved 50bps in the last few weeks which finally caught up to the stock market. Notably, the 10YR Treasury bond at 3.16% (Friday close) is much higher than Japan’s JGB at 0.15% and the German Bund at 0.49%. These differentials can’t last for long as the dollar keeps gaining strength it puts a massive strain on our trading partners. The markets always mean revert so I expect these differentials to tighten in the coming year(s) which could translate into exporting interest rate volatility around the globe. Emerging markets become roadkill in this scenario and overseas central banks lose influence over their domestic markets as interest rates rise to “catch-up” with the U.S. 10YR. One thing is becoming clear, volatility may be a permanent state of affairs in the coming years as interest rates normalize around the world.

Does this chart indicate to you where U.S. interest rates are headed?

Normally, you look for the DOW and industrials to roll-over first but in this case it was the small cap growth companies in the Russell 2000 that lost their mojo. Below are two charts of the Russell 2000, the first shows a long-term chart with a level of resistance from the financial crisis and the second a chart of the recent price action.

The DOW, S&P 500 and NASDAQ were all pulled down in tandem to their 200 day moving averages:

Good chance we saw a major market top given there was no news or bad economic data on the breakdown – the market just threw in the towel after the 10YR spiked 50 bps.

Good luck out there! And remember, prices always move before fundamentals.