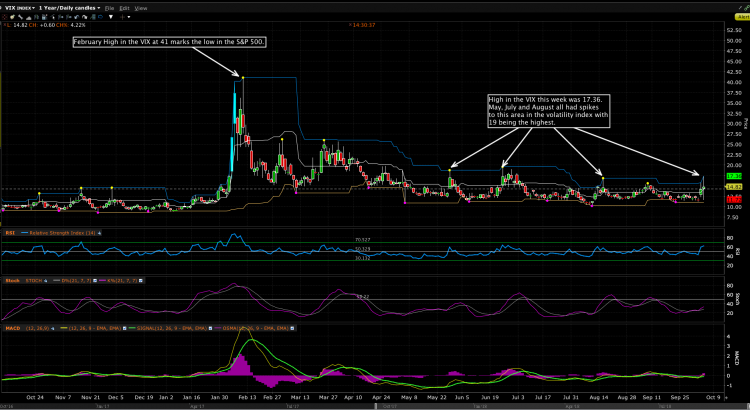 Volatility kicked up last week but there will be more weeks like this as interest rates “normalize” from historically low levels. I have several charts this week as sometimes it is easier just to show a picture. Before throwing in the towel on equities, keep in mind that the VIX volatility index closed the week below 15 where 18 is the historical average and large one-day moves don’t happen until this index breaks well above 25. Let’s look at how this index looks for 2018:

The 10YR Treasury yield is on the rise and will continue to move higher for the foreseeable future. The market only cares about how quickly this happens as spikes in interest rates can cause dislocations in the debt markets which translate into stocks going lower. Below is a long-term chart of 10YR yields where you can see the direction is clearly higher:

The change in interest rates has affected each index disproportionally. Unlike January, where all the indices rolled over in the same manner, the major indices have all behaved differently which may mean support levels will be found in the coming sessions. Here is the DOW ETF ($DIA) that barely budged:

The S&P 500’s pullback has also been modest but may be at a support level:

The NASDAQ Index has been more volatile and may have a bit more to go on the downside:

Finally, the small caps have been the most volatile but have found a support zone that should hold:

The lack of synchronization to the downside tells me we should find some positive price action this week – perhaps after testing Friday’s low but that is not a requirement given some of the support zones found from Friday’s price action.