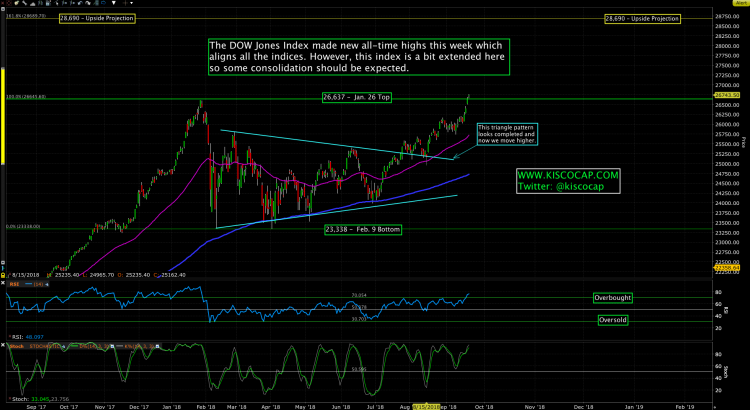 The U.S. stock markets trekked higher this week as the rest of the world struggles to make a turnaround in the face of trade wars and sluggish growth. The next six weeks are going to be interesting as we have a Fed meeting on Wednesday, ongoing trade negotiations and an upcoming mid-term election on November 6th. Historically, September is a tough month for stocks as the summer comes to a close and fund managers need to decide on how to position for Q4 and what to hold into the new year. The strongest index this past week was the DOW which made new all-time highs and broke free of the resistance of the old top that was created in January. The large cap names are leading stocks higher right now.

With so much going on, I think the market will rely on earnings and guidance from companies as a compass on how to navigate the next 6 months. From the few companies that have reported, the results have looked good but some companies are dialing back their earnings expectations over the next few quarters due to trade and tariff concerns. However, if the market remains steadfast in its uptrend then I doubt what happens in November will move the dial as no major change to policy seems imminent.

The Chinese banking system is $44 trillion in size. That’s almost three times the US banking system and the Chinese economy is showing weakness as evidenced by their weak stock market. How will their debt load affect their stock market if their economy contracts? (Bear Traps Report)