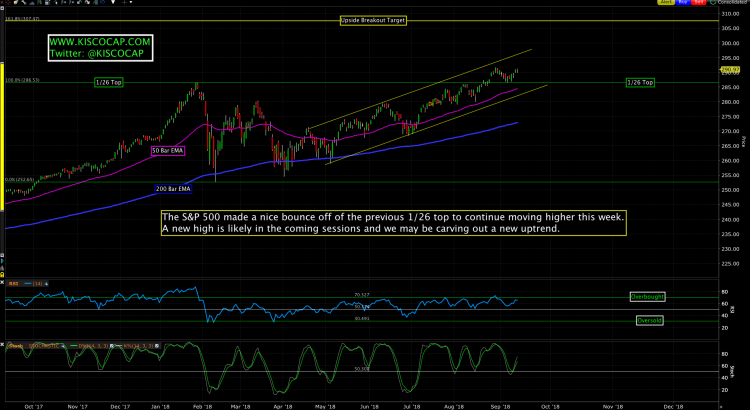 An uneventful week as the stock market continues to trek higher this week. Economic data releases have been confirming the economy is on solid footing so the market is likely looking forward to the next Federal Reserve meeting on September 26th. Beyond that will be earnings season and a look under the hood of corporate America. The US markets have been a safe haven these past several weeks as emerging market volatility and sluggish growth prospects encompass many economies across the globe. Perhaps, the USA will pull everyone up from the doldrums once we get past the elections and trade disputes but that is a conversation for Q4.

For now, the US stock and bond markets are the place to be for foreign investors. We have been in a corrective price pattern since late August and we closed out the week on a good enough note that new highs are probably right around the corner. Only the DOW has lagged in taking out its January top – pessimists will largely be extinguished once this happens.

Below is the chart of the S&P 500 ETF, notice how the RSI (Relative Strength Indicator) below is channeling between its centerline (white) and overbought reading (green line) – a sign of a trending market.

That is all for now until next week’s Market Update. If you like this report, feel free to share it on social media through the share buttons on your left. Contact me at the information below if you would like a copy of the Kisco Capital brochure.