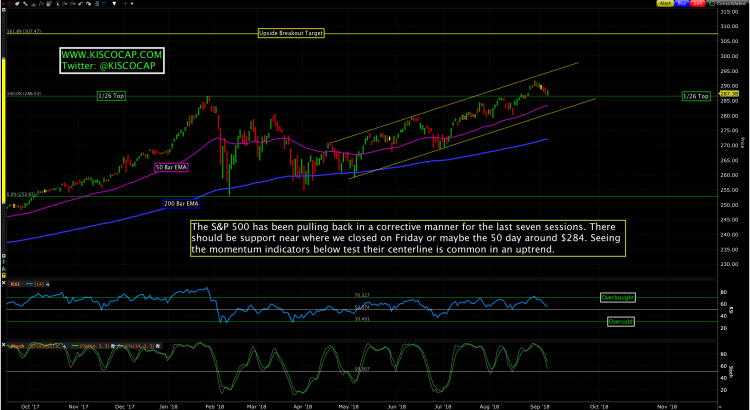 Welcome back! The summer has ended and so did the stock market rally in August. Not to worry, some of the economic data below indicates the economy is on solid footing despite being late in the business cycle. Technically, the past week has been choppy and and working off overbought conditions established in August. It wouldn’t surprise me if there were a few more choppy sessions next week or perhaps a test of the 50 day in the chart below.

Many charts of the large cap companies are still trending despite the choppiness in the indices – perhaps new leadership is needed for another leg higher in the stock market. Leadership from the technology stocks are wavering as Facebook, Netflix and Tesla have potential trend reversals or large corrections after moving higher for several years. I have been seeing much better price action in healthcare, industrials and small cap growth stocks. Trade noise with Canada and China are still on tap (they will both capitulate) and soon the November election will make you want to turn the channel to Football or the MLB playoffs (don’t forget about the NHL). At least markets provide a price pattern for us to follow.

Its back to school season! Be glad you don’t live in Sweden or Estonia!